This article is using {{Card template}}.
See Help:Style guide/Card for how to edit this kind of article.
Edit this article
Golakka Crawler
41316 • UNG_807
Regular 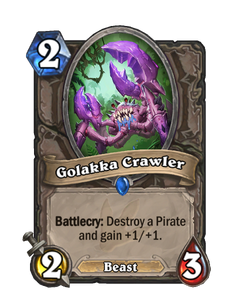 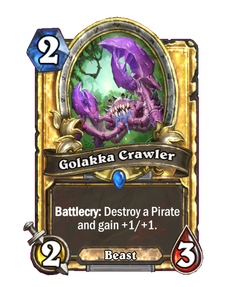 Universally adored by both control decks and ninjas. 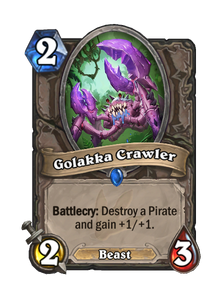 Golakka Crawler is a neutral minion card, from the Journey to Un'Goro set.

Golakka Crawler provides an obvious option for a strong tech card against decks that rely heavily on Pirates.

Golakka Hot Springs is a region in western Un'goro Crater, just north of Terror Run. The area features geysers and pools heated by the nearby volcano. Spark Nilminer can be found at the top of a large geyser, while Maximillian of Northshire can be found at the base of the same one.

Steaming Fury elementals patrol the shores of the pools.