This article is using {{Card template}}.
See Help:Style guide/Card for how to edit this kind of article.
Edit this article
Goblin Sapper
2063 • GVG_095
Regular 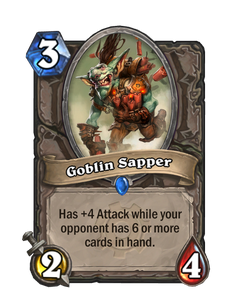 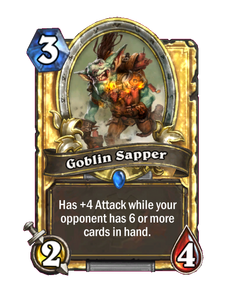 He’s not such a binge exploder anymore. These days, he only explodes socially. 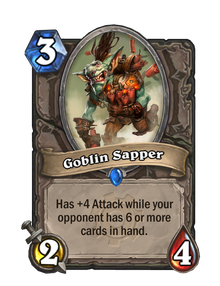 Goblin Sapper is a rare neutral minion card, from the Goblins vs Gnomes set.

This card is clearly designed to be used against control decks, which tend to accumulate a large number of cards in hand. Handlocks in particular may use Life Tap to gain a full hand as early as turn 4, while most will gain cards more slowly, and some such as priest may only gain a large hand late in the game. It is therefore quite possible to play this with its effect active as early as turn 2.

However, it is important to note that this minion's effect is not granted by a Battlecry but by an ongoing effect. This means that the minion's Attack will be altered on the fly in response to the size of the opponent's hand. Players may activate the Sapper's effect by accumulating more cards, or deactivate it by shedding cards.

This allows the Sapper to act as a deterrent to card hoarding. A player without Taunts who has 6 cards in hand may be tempted to play one, against their preferred strategy, simply in order to reduce the damage from the Sapper by 4 points. When the opponent has a very large number of cards, it is likely they will be unable (or unwilling) to reduce their total contrary to their strategy, meaning the Sapper will achieve its potential: a very cheap, and fairly powerful 6/4 minion.

By inflating the opponent's hand size with cards like Naturalize, Coldlight Oracle, King Mukla and Dancing Swords, the player can directly increase the Attack of the Sapper. This can allow for superior trading, or an extra burst of damage to the face. The Sapper has good potential for sharing strategy with the similar Clockwork Giant.

Even without its special effect, the Sapper is a sticky 2/4, allowing it to trade for multiple 3/2s or other small minions, and making it a fair target for healing.

Goblin sappers are goblin explosives specialists. First seen in Warcraft II, they have since made appearances in Warcraft III and World of Warcraft.

Goblin sappers are trios of kamikaze goblins that were once deployed as ground troops for the Horde during the Second War, well versed in sneaking up to a fortress and setting off deadly charges.

The mischievous Goblin Sappers are known throughout the Horde for their incredible aptitude for destruction. These diabolical Goblins are invariably armed with extremely volatile explosives; which enable them to level enemy structures and weapon emplacements. Although the Sappers are highly unpredictable and insubordinate, they have become necessary to the plans of conquest maintained by the Horde.