This article is using {{Card template}}.
See Help:Style guide/Card for how to edit this kind of article.
Edit this article
Goblin Blastmage
1934 • GVG_004
Regular 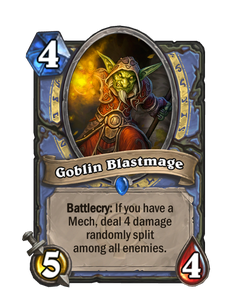 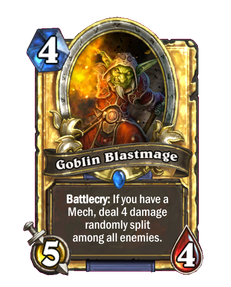 Dimensions: Full • 330 x 410px
Battlecry: If you have a Mech, deal 4 damage randomly split among all enemies.
Flavor text

If you can't find a bomb to throw, just pick up any goblin invention and throw that. 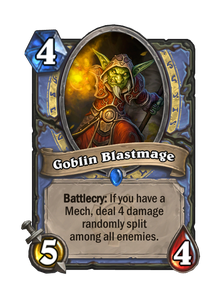 Goblin Blastmage is a rare mage minion card, from the Goblins vs Gnomes set.

This minion's effect shoots 4 missiles, each one dealing 1 damage to a randomly selected enemy character:

By himself, the Goblin Blastmage has decent if lopsided stats for its cost. But when paired with a Mech to trigger its Battlecry, the damage dealt can wreck the opponent's minions and board control, much like a well-placed Arcane Missiles. It is best used to attempt and clear 1-Health minions, or pop enemy Divine Shields. Even after turn 4, the Blastmage can still be a strong card to draw, since the mage can play a low cost Mech alongside the Blastmage in the same turn. Harvest Golem is the ideal partner for the Blastmage, with both the normal and Damaged Golem minions counting as Mechs.