This article is using {{Card template}}.
See Help:Style guide/Card for how to edit this kind of article.
Edit this article
Gnomeferatu
42670 • ICC_407
Regular 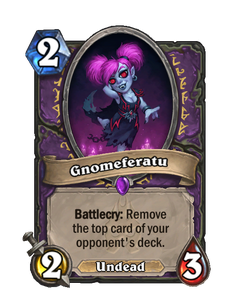 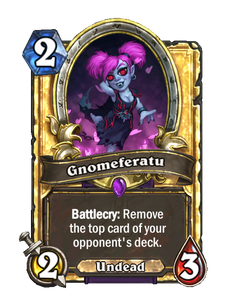 She prefers the term "Glampire." 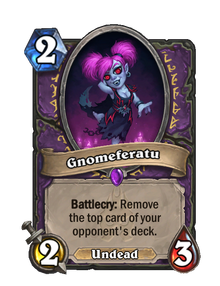 Gnomeferatu is an epic warlock minion card, from the Knights of the Frozen Throne set.

Gnomeferatu has a disruptive effect. It has a chance of removing an important card from your opponent's deck, possibly causing them to unable to complete a combo or weakening their late game by removing a key card such as N'Zoth, the Corruptor, but since the removed card is effectively random, it has no net effect (besides revealing the card) until the game goes to fatigue. However, Gnomeferatu can be saved to disrupt certain effects after your opponent has manipulated their deck. For example: it can be used to destroy a Map to the Golden Monkey or Un'Goro Pack on the turn after Elise Starseeker/Elise the Trailblazer was played with an empty deck, destroy a key combo piece in response to Hemet, Jungle Hunter, or remove a shuffled card created by Baleful Banker.

In Arena, Gnomeferatu is a 2/3 for 2 Mana, which makes it a bit below average. It's likely to only be useful as a late pick to help fill out the draft's curve, as its ability is irrelevant in most cases.

Vampires or vampyr are a type of undead who drink blood in order to sustain themselves. Up until the third invasion of the Burning Legion on Azeroth, knowledge of vampyr was mostly limited to the darkfallen. With the people of Azeroth flocking to the Broken Isles, Sir Finley Mrrgglton of the Explorers' League discovered an ancient vrykul vampyr in Stormheim who, upon being woken up from his slumber by human pirates, transformed them into vampires as well.

Notably, this is the first known example of a gnome becoming a vampire.