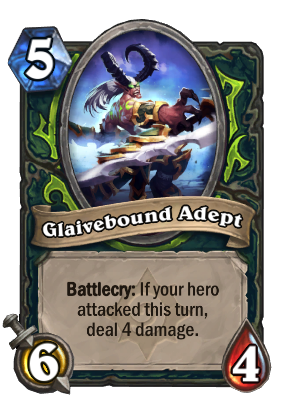 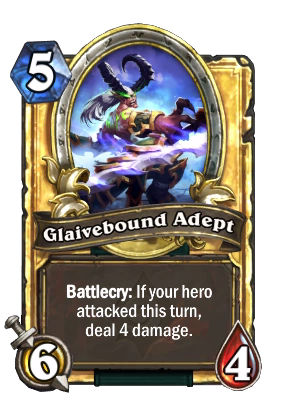 "Initiate, this is your glaive. Think of it as an extension of yourself... Did you just throw it?!"

Glaivebound Adept is a demon hunter minion card, inducted into the Legacy set, formerly from the Basic set.

Two copies of regular and golden Glaivebound Adept are automatically given after the player completes the Ranked's New player experience system, unlocking Wild and Classic format.

With a very potent Battlecry, Glaivebound Adept is one of demon hunter's best midgame options. The condition is very easy to fulfill, since Demon Claws can be used for 1 mana at any time. You can also activate it on curve by holding a weapon. Aggro Demon Hunter can use it to burst the opponent or remove medium threats, while leaving behind a statline that threatens the opponent.

This minion is likely based on the Throw Glaive ability in World of Warcraft, which allows the Demon Hunter to throw their glaive from range. Unlike this minion, the thrown glaive will ricochet between enemies.