Hearthstone Wiki
Register
Don't have an account?
Sign In
Advertisement
in: All cards, Wild format cards, Pages with no result queries, Uncategorised art

This article is using {{Card template}}.
See Help:Style guide/Card for how to edit this kind of article.
Edit this article
Gladiator's Longbow
311 • DS1_188
Regular 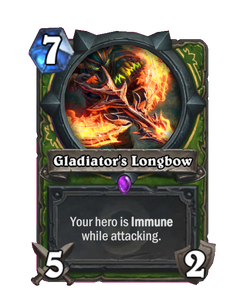 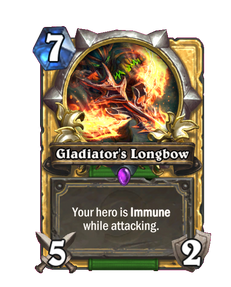 The longbow allows shots to be fired from farther away and is useful for firing on particularly odorous targets. 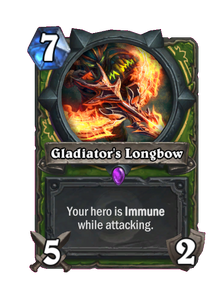 Gladiator's Longbow is an epic hunter weapon card, inducted into the Legacy set, formerly from the Classic set. 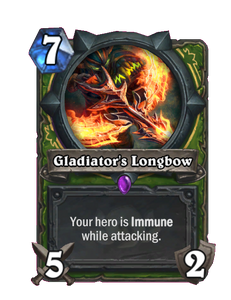 This card's Immune effect means that it can be used to tackle minions without taking damage, clearing a path for your heavy hitters to strike at the enemy hero, or to take out opposing minions that greatly threaten you, such as the Core Hound. It can also provide a useful form of direct damage for finishing the enemy hero. However, the card's high cost should be considered.