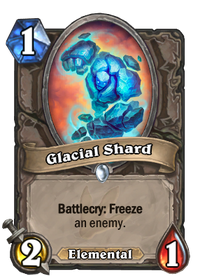 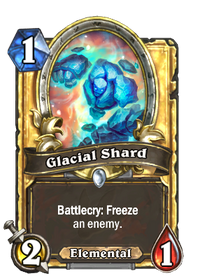 Glacial Shard is a common neutral minion card, from the Journey to Un'Goro set.

Glacial Shard can be obtained through Journey to Un'Goro card packs, or through crafting.

This minion has average stats, but a very powerful effect. It can be used to halt an enemy minion, allowing you to gain Tempo. It becomes more powerful when used against bigger threats, meaning it can be quite impactful even in the late game. Unlike other 1 health minions, it can be safely played against a Rogue or Druid by targeting the enemy hero, preventing them from killing it with their Hero Power.

Thanks to its Elemental tribe and usefulness throughout the game, this minion is great for triggering your Elemental synergies.

Glacial Shard synergizes nicely with cards such as Shatter and Ice Lance as well.

Summon
Ice to meet you!