This article is using {{Card template}}.
See Help:Style guide/Card for how to edit this kind of article.
Edit this article
Gilblin Stalker
2049 • GVG_081
Regular 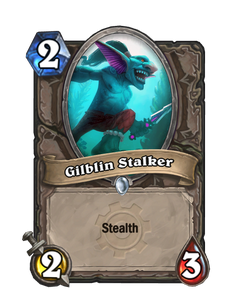 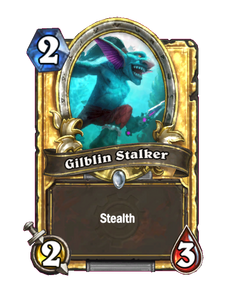 "Shhh, I think I hear something."
"Ah, it's probably nothing." - Every Henchman 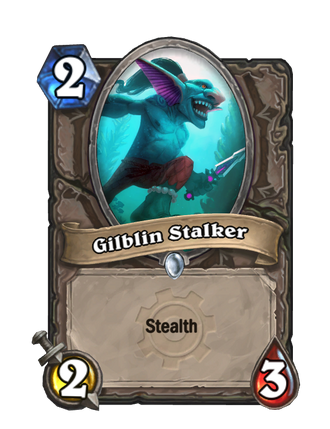 Gilblin Stalker is a common neutral minion card, from the Goblins vs Gnomes set.

Since it has 3 health the Gilblin Stalker can survive most AoE effects and act on your next turn. This makes it useful if you want to cast buff spells, especially on round 3 or 4.

The gilgoblins, sometimes called gilblins, gill goblins, water-goblins, or kelfin are a species of aquatic goblin that live within the ocean. They were first introduced into the game with the Cataclysm expansion and can mainly be found in the deep sea in areas like Vashj'ir and Nazjatar, though other groups have invaded the coasts of the Swamp of Sorrows, Azsuna, and Stormsong Valley as well.

The adaptations that allow gilgoblins to survive the aquatic life has apparently drained some of their higher brain functions and their actions are guided almost entirely by greed. They are most often seen stealing things.

Gilgoblin's live in big clams, which they decorate with their new-found treasure, including cannons, cannonballs and other things.

Gilblin Stalkers are gilblins found on the shoreline of the Swamp of Sorrows in the Eastern Kingdoms. However, the art for this card appears to depict Vashj'ir.