Edit
watch 02:52
Roblox: DeepWoken - The Loop
Do you like this video?
Play Sound
Giggling Inventor
Regular 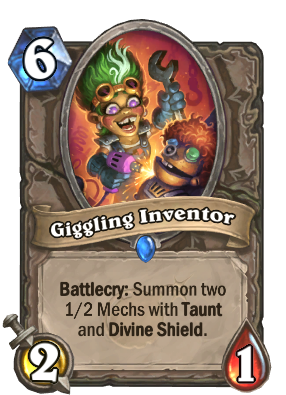 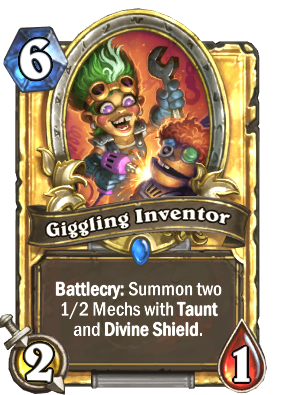 "I shall build a mighty golden paladin! And he will GREET the WORLD!"

Giggling Inventor is a rare neutral minion card, from The Boomsday Project set.

Giggling Inventor can be obtained through The Boomsday Project card packs, or through crafting. 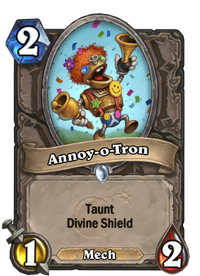 This card's very poor stats are offset by the two Annoy-o-Trons summoned by its Battlecry. Their Taunt and Divine Shields can shut down enemy aggression and buy you time to recover. It's also useful for aggressive decks that use area buffs like Bloodlust, Fungalmancer or The Caverns Below since it's difficult to completely kill off both Annoy-o-Trons in one turn with anything short of a Mossy Horror. This card also works well with Magnetic minions, since at least one of the Annoy-o-Trons will likely be able to survive a turn and receive the buff. Giggling Inventor's terrible stats can be offset with Mutate or Witchy Lackey.