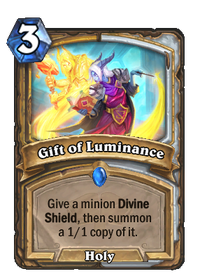 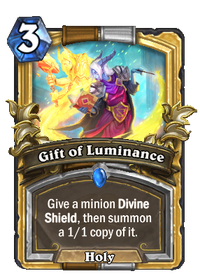 Give a minion Divine Shield, then summon a 1/1 copy of it.
Flavor text

You get a small version of yourself in a snow globe to remember the moment.

Gift of Luminance is a rare paladin/priest minion card, from the Scholomance Academy set.

Gift of Luminance is a strong and versatile 3 cost spell. You can use it to create a secondary source or strong card and even copy an opponent's card.

Deathrattle effects will be carried on too, and by this way, you can create the second card for a possible Vectus, specially when using really strong effects like Murgur Murgurgle or Arfus.

Revive effects (Desperate Stand and similar buffs) will be copied too. The same applies for other secondary Deathrattles like Val'anyr or Libram of Wisdom.

Spellburst can be copied too. And by default, when you copy a card with Spellburst, its effect will activate, and the it will be copied.