This article is using {{Card template}}.
See Help:Style guide/Card for how to edit this kind of article.
Edit this article
Giant Anaconda
41262 • UNG_086
Regular 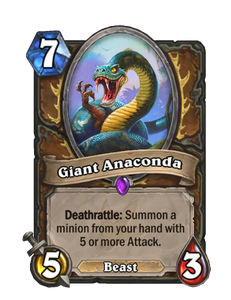 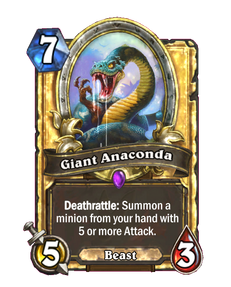 Must be something it ate. 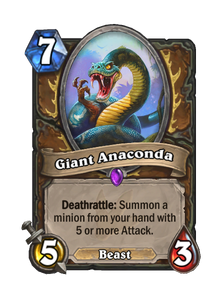 Giant Anaconda is an epic druid minion card, from the Journey to Un'Goro set.

This minion has terrible stats for its cost, but its Deathrattle has the potential to pull out a much stronger minion out of the player's hand. Ideally, keeping a minion whose power lies on its raw stats like Tyrantus is the most effective way to gain value out of this card, while cards with a strong Battlecry or a high-Attack, low-cost minion like Elder Longneck can end up backfiring.

This card is best used to speed up the Jungle Giants quest. Be very cautious when playing this as the last card for the quest however, since the quest places Barnabus the Stomper in the hand, where Giant Anaconda's death could pull it out and make its Battlecry unusable.

Example: A warrior has stolen Giant Anaconda using Mind Control Tech and has a Gorehowl in hand. The opponent kills the Anaconda and the Gorehowl is equipped.