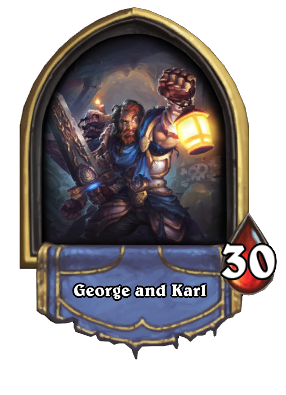 George and Karl is a boss that can be encountered during the Dungeon Run. 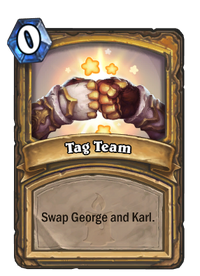 If you defeat one of them, the other shows up and takes control of the board. Keep the board as clear as possible, as their main strategy is to buff minions fast.

King Togwaggle
These fools come to us from the jungle.

George and Karl
Light's sake, Karl! NOW look at where we are!

George
Don't I recognize you from Un'goro?
Karl
I don't speak to strangers.

George
Move aside, I'm taking over.
Step back, it's MY turn!
This is ridiculous. Hand me the cards.
Karl
Can I go, George? Can I?
Let me have a go!
Let me help, George!

Karl
George? Oh, no, not George!

George
Now, maybe if we go THIS way, we'll find our way back to Un'goro.

George and Karl are two Silver Hand Recruits that were lost then found in an Un'Goro expedition. They are referenced in the flavor text for Lost in the Jungle and Vinecleaver.