This article is using {{Card template}}.
See Help:Style guide/Card for how to edit this kind of article.
Edit this article
Genzo, the Shark
40607 • CFM_808
Regular 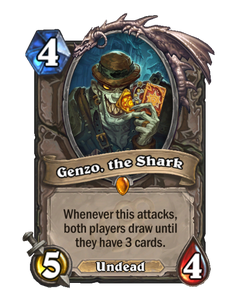 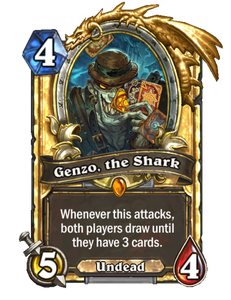 Dimensions: Full • 330 x 410px
Elite
Whenever this attacks, both players draw until they have 3 cards.
Flavor text

Infamous in the seedy underground card rooms of Gadgetzan, he got his nickname winning the coveted Shark Plushie in the city's first Hearthstone tournament. 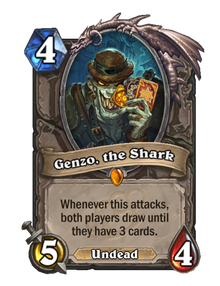 Genzo, the Shark is a legendary neutral minion card, from the Mean Streets of Gadgetzan set.

Similarly to Jeeves, this card fits best in a deck that plans to empty its hand often - something mostly aggro decks do. Note that again like Jeeves, this card will hurt you in an aggro mirror - but it is likely to be extremely powerful against a control-oriented deck maintaining a larger hand size.

Summon
Pick a card... any card.

Genzo is unique to Hearthstone. According to the card's flavor text and art, the Forsaken Genzo may be the first character in the game who is known to actually play Hearthstone - with the exception of a few bosses such as Arch-Thief Rafaam, in their tongue-in-cheek adventure appearances. His nickname "the Shark" is likely a reference to the term "cardshark", itself a variation of "cardsharp", meaning "One who is skilled at card games, especially at cheating in them." If the latter element is accurate, Genzo's skill at the game may not be as great as he would have you believe.