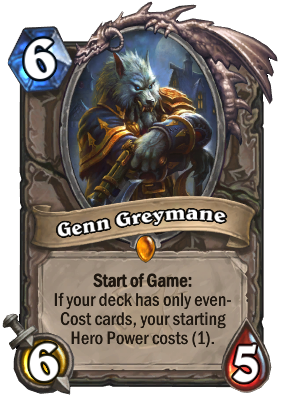 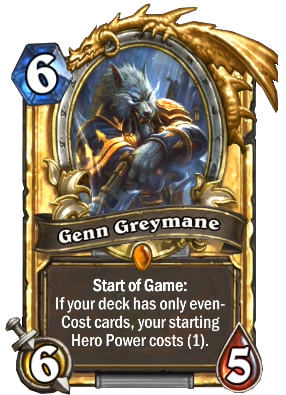 Start of Game: If your deck has only even-Cost cards, your starting Hero Power costs (1).
Flavor text

Ever since Sylvanas killed his son, he's dreamed of getting… even.

Genn Greymane is a legendary neutral minion card, from The Witchwood set. It was once in the Hall of Fame set from April 4, 2019 to March 30, 2021.

Genn Greymane can be obtained through The Witchwood card packs, or through crafting.

Genn Greymane offers a great Start of Game effect at the cost of having no odd-cost cards in your deck. While the effect is generally weaker than that of Baku the Mooneater, a 1-cost Hero Power allows you to fill in your curve more efficiently, and unlike Baku, Genn can be played as a minion that isn't horribly understatted.

Genn Greymane is the current King of Gilneas, and one of the original founders of the Alliance of Lordaeron. He is a large bearish man, a brawny warrior with thick features, a heavy beard, and black and gray armor. Greymane has also been noted for being stubborn, proud, strong-willed, cunning, and arrogant.

During the Second War, Greymane met with the other human leaders at Capital City to hear of Stormwind's fall at the hands of the orcish Horde. Greymane joined the other human leaders in forming the Alliance of Lordaeron to counter the Horde threat, but due to his pride, he offered only token support. After the conclusion of the Second War, Greymane chafed at using Gilnean taxes to help pay for the orc internment camps and Nethergarde Keep. Greymane decided that Gilneas could not and would not pay for the wars of other nations, so he withdrew Gilneas from the Alliance, ordered the construction of the Greymane Wall and isolated Gilneas from the rest of the world.

Around the time of the Third War, Greymane instructed Archmage Arugal, a Dalaran wizard loyal to Gilneas, to summon feral worgen to protect Gilneas from the Scourge threat. The plan backfired, and the worgen curse would eventually run rampant among the Gilnean population. In the time between the Third War and the War against the Lich King, the number of those afflicted with the Worgen curse had grown and were now attacking Gilneas City. To counter the threat, Greymane helped to defend the city and aided in the evacuation of citizens to Duskhaven. In the aftermath, Greymane faced the dual threats of the Cataclysm and the Forsaken invasion, culminating in the battle to retake Gilneas City from the Forsaken and witnessing the death of his son and heir, Liam.

Humbled by his son's death and the devastation of his kingdom, Greymane accepted the aid of the night elves, who had offered to relocate Gilnean survivors to Darnassus. In a fit of stubbornness, Greymane was against formally rejoining the Alliance until he had almost lost his wife and daughter during the crossing. After a short layover at Darnassus and reestablishing diplomatic ties with King Varian Wrynn, Greymane becomes a changed man. Greymane becomes a staunch supporter of the Alliance, adding the ferocity of the Gilneans to the considerable might of the Alliance, intent on one day reclaiming his lost kingdom.

We dare not approach the king too closely, but this is what we know.

Genn Greymane is King of Gilneas (the country and the city). His arrogance, stubbornness, and overconfidence once led Gilneas down a path of isolationism that brought it to the brink of destruction. Had he not learned to be a better ruler since those days, the city might already be lost.

In the days since the curse began afflicting the wood, he has worked tirelessly in the service of his city. He is often confined to his study, working into the wee hours by gaslight, night after night. The constant flow of reports emerging from the city allow him no rest: disappearances in the wood, horrifying shapes with glowing eyes stalking the city streets, and an endless array of ever stranger and more disturbing phenomena. There are even rumors that citizens have turned to a doomsaying “Crowskin” cult that operates in shadowy back rooms and cellars.

The normally tough-minded people of Gilneas are gripped with fear, suspicion, and superstition, but King Greymane has an iron will, and he expects the same of his subjects. His response has been to crack down, demanding absolute discipline and dedication. He’s tasked one of his finest thieftakers with investigating the cult, a man named Shaw. That’s not all: the Worgen King is currently recruiting the best monster hunters in Gilneas for a sortie into the forest.

No subtlety here: he intends to confront the threat head-on and howling.[3]

Commentary: Baku and Genn are powerful cards that have promoted new strategies since their introduction in the metagame. Those strategies have been more prevalent than we’d intended in Standard, and we felt that they might end up overshadowing what we're going to introduce in the Year of the Dragon. In order for set rotation to breathe new life into Standard and maintain overall health of the ladder, we are rotating Baku and Genn into the Hall of Fame a year earlier than normal.