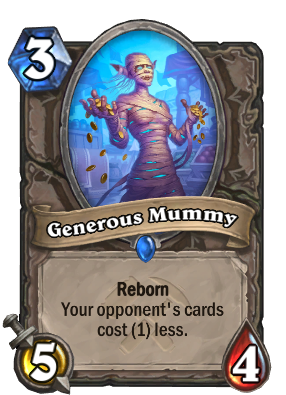 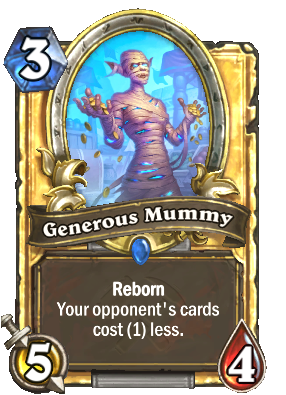 Yeah, she's mummified, but her money hasn’t dried up!

Generous Mummy is a rare neutral minion card, from the Saviors of Uldum set.

Generous Mummy can be obtained through Saviors of Uldum card packs, or through crafting.

Generous Mummy is a massively overstatted minion, being comparable to Cursed Disciple for one less mana and 3 more Health. It offsets this, however, by making your opponent's plays have similar value. Its Reborn ability makes it remarkably sticky, which while leaving behind another powerful body that must be dealt with, also makes it harder for you to get rid of the mummy if she's helping your opponent too much. This effect only compounds itself against decks that wish to play lots of cheap cards, like a Miracle Rogue, an aggro deck such as Murloc Shaman, or a deck running Jade Idol. Thus, it may be necessary to either off your Mummy quickly or simply let it stay in your hand until your opponent runs out of steam.

Similarly to Cursed Disciple, Generous Mummy is capable of providing two of the five minions necessary to unlock the potential of Barnabus the Stomper due to having Reborn. Its downside, however, must still be mitigated, or else you may simply be run over early on. Of course, being so strong means that it could fit well into a Zoo shell, since efficiently costed minions with drawbacks have been a staple of Zoo since the very beginning.