This article is using {{Card template}}.
See Help:Style guide/Card for how to edit this kind of article.
Edit this article
General Husam
57394 • ULDA_BOSS_73h
Regular 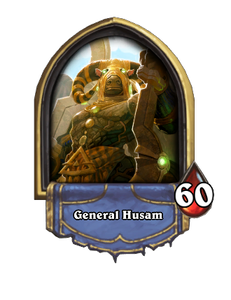 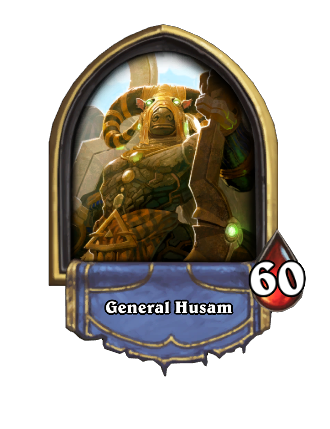 General Husam is a boss that can be encountered initially in Chapter 1 of Tombs of Terror. After completing Chapter 1, this boss encounter will be available in any completed chapter.

General Husam
Invaders! You shall go no further!

Are you a holy warrior such as I, murloc?

General Husam
Beg forgiveness and the Dark Pharaoh may yet spare you.
Our power has grown. The plagues are but a prelude.
You should have turned back when you could.

I will smash you myself!

Tread lightly! (revealing)
You stepped in one of my traps! (activating)

Return to your prison!

You meet your demise today!
Unknown
VO_ULDA_BOSS_73h_Male_NefersetTolvir_PlayerTrigger_Cursed_Lieutenant_01 A lieutenant who defies a general?!

General Husam is a tol'vir boss in the Lost City of the Tol'vir.

From the World of Warcraft Adventure Guide
The titans themselves appointed General Husam as one of Uldum's foremost guardians. After

Siamat, Lord of the South Wind, cured the Neferset tol'vir's curse of flesh, Husam helmed a rebellion that culminated in the air elemental's imprisonment.

Tekahn, Plague Lord of Flame as the final boss of the final act.