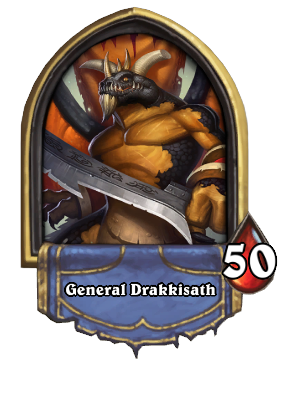 Don't let Nefarian fool you. He's a real bad dude. So is Drakkisath.

General Drakkisath is a boss encounter found in the Blackrock Mountain adventure. It is the second encounter of the adventure's third wing, Blackrock Spire. 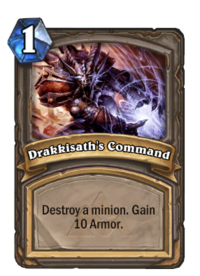 Drakkisath's hero power Intense Gaze (Heroic) strongly affects battles fought against him, with all cards costing 1 mana and the player being limited to 1 mana crystal. This generally means the player will be limited to 1 card per turn, and also prevents the use of any hero power (Besides Demon Claws or Demonic Blast). However, it also allows the player to play any card, on any turn.

This obviously encourages the creation of a deck featuring very powerful cards, with their cost irrelevant, matching Drakkisath's own deck. Mind Control is also a very strong card for this encounter, as is Lightbomb, and Resurrect can act as a filler, allowing you to focus on a deck filled with only the most powerful minions. Steadily putting out high power minions like Ragnaros the Firelord, Dr. Boom, Boulderfist Ogre and War Golem is sufficient in Normal mode to defeat the General. Kel'Thuzad can be useful for trading (although Drakkisath's removal means he may not last long) while Deathrattles can be useful for recovering from removal, but this is secondary to the importance of choosing high power minions, Attack being more important than Health.

Drakkisath alternates between playing powerful, high cost minions, and using removal like Twisting Nether and Brawl to wipe the board. Drakkisath also has a few weapons, but will tend to use them to go face rather than trade, unless the minion is small enough to be destroyed outright.

An alternate strategy would be to run Majordomo Executus in your deck (see #Work-arounds, below).

Heroic Drakkisath is very punishing. Heroic Intense Gaze ensures an incredibly unfair playing field, with Drakkisath getting 2 cards each turn to counter your 1.

The main approach and strategy as outlined above remains the same - use high power minions to deal devastating damage. Kel'Thuzad in particular is extremely effective for allowing you to trade your minions with his, providing a way to break Drakkisath's 2-for-1 advantage. However, Drakkisath can use removal including Twisting Nether to overturn any advantage.

Victory against Drakkisath is very tricky, and appears to be heavily dependent on RNG for both your card draw and his. In general, managing to establish a board advantage with 2-for-1 minions is the key to defeating him, but maintaining that advantage is difficult. Minions with more than 7 Health can usually survive 2 attacks, while 7 Attack is required to reliably trade with Drakkisath's. Force-Tank MAX is a star player, while 8/8s like Mountain Giant, Nozdormu and Fel Reaver are solid staple minions for the deck. Ragnaros the Firelord can be hugely effective (with a little luck), while Kel'Thuzad may be the key to the whole encounter. Cards which generate other cards such as Muster for Battle and The Forest's Aid can be useful for providing some additional targets or to remove divine shield from enemy Force-Tank MAXs, although this is a relatively minor advantage. Alexstrasza can be very effective in reducing his substantial Health, and is not banned from the match.

However, regardless of your play, Drakkisath can and will use removal including Twisting Nether to reset the board, generally guaranteeing his subsequent victory. The right luck with his card draw is therefore a prerequisite to ensure you have even a fighting chance of finding the right cards to defeat him. Players intent on beating Drakkisath would therefore be well advised to restart the match unless they have a strong opening hand.

Note that to make the best use of Kel'Thuzad in a starting hand, another minion with comparibly low health like Core Hound should be played in turn 1 so that it can be revived immediately in turn 2. Starting with a Force-Tank MAX even allows to delay the playing of Kel'Thuzad to turn 3. To save Kel'Thuzad from death by Twisting Nethers or Drakkisath's Command, a peculiar strategy can be deployed by mages, by having Duplicate and Counterspell in the deck (plus some other secrets maybe), and using ever-dying Mad Scientists to basically play one secret and one other card per turn.

One cheap work-around to the encounter is to include Majordomo Executus in your deck. If Drakkisath uses Mindgames and draws Executus, you can destroy the minion in order to transform Drakkisath into Ragnaros. This has several effects: it reduces his 50 Health and 30 Armor to only 8 Health (no Armor); and it replaces Intense Gaze with DIE, INSECT!, thus removing the special restrictions from the encounter. In many cases, the player will be able to deal 8 damage to the boss either that same turn or the next, providing an easy solution to what is otherwise a very difficult encounter.

General Drakkisath will sometimes use Drakkisath's Command on his own Kidnapper. 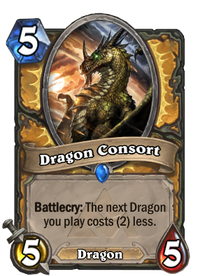 Nefarian
Did you take a wrong turn? The Back button is at the bottom of your screen.

General Drakkisath
What are you doing here?

General Drakkisath
Why?! Tell me why! Please, I liked you.

General Drakkisath
Are you here to help me destroy the mortals of this world?

General Drakkisath
Lord Nefarius! I thought this was the one who took care of Ragnaros for us.
Nefarian
Yes, Drakkisath. Adventurer - you are still on the wrong side of the mountain!

Nefarian
Look. Go play some ranked mode. This adventure is not for you.

General Drakkisath
I will protect the Spire.

General Drakkisath
Rrh. Aah! Noooooo!
Nefarian
I am starting to get annoyed.

This dragonkin general leads Nefarian’s armies within Blackrock to inflict corporal punishment on the minions of Ragnaros. Ragnaros might also be a bad guy, but sometimes it turns out that the enemy of your enemy is still kind of a jerk. Don’t listen to that colonel of doubt: Drakkisath might be anti-Firelord, but in private he’s still pro-evil.[1]

General Drakkisath was the dragonspawn ruler of the armies of Nefarian, son of Deathwing. From the pinnacle of Blackrock Spire, he oversaw his forces in their war to drive out the Dark Iron dwarves from the bowels of Blackrock Mountain.

A cunning and ruthless strategist, Drakkisath commands Nefarian's armies in the war with Ragnaros. After securing victories against the Dark Irons, General Drakkisath's forces are positioned to drive the dwarves out of Blackrock Mountain once and for all.