This article is using {{Card template}}.
See Help:Style guide/Card for how to edit this kind of article.
Edit this article
Gelbin Mekkatorque
858 • EX1_112
Regular 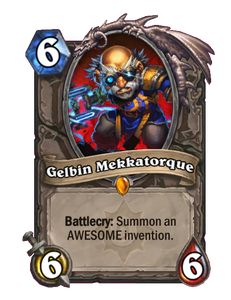 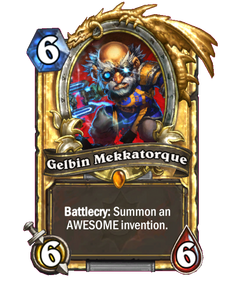 He's the leader of the gnomes, and an incredible inventor. He's getting better, too; He turns things into chickens WAY less than he used to. 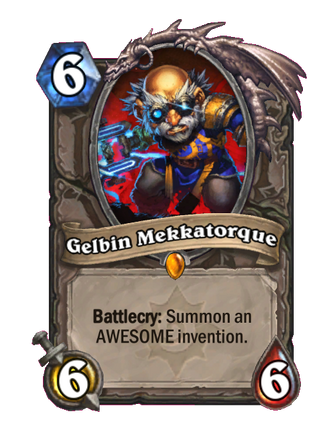 Gelbin Mekkatorque is a legendary neutral minion card, inducted into the Legacy set, formerly from Hall of Fame and Promo sets. 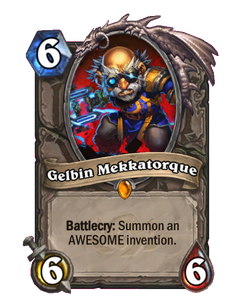 Regular Gelbin Mekkatorque can be obtained through crafting only.

Golden Gelbin Mekkatorque is uncraftable and cannot be crafted or disenchanted. 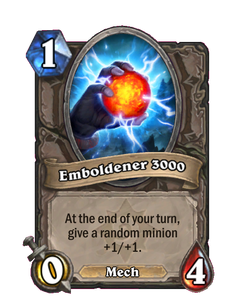 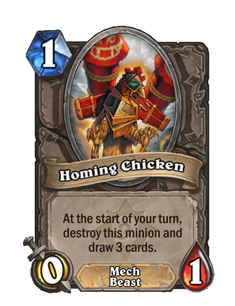 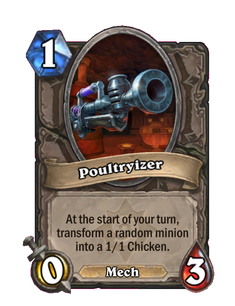 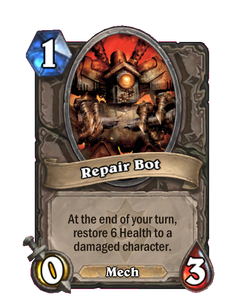 Playing Gelbin will randomly summon one of four possible "AWESOME" inventions. All inventions are minions with powerful abilities, but 0 Attack. For more detailed strategy, see the sections below.

Gelbin Mekkatorque's inventions have the power to sway the course of the match significantly, but with no way to control their effects, are almost as likely to spell doom for the summoning player as for their opponent. As such, Gelbin is one of the strongest examples of RNG in the game. Note that none of the inventions differentiate between friendly and hostile targets.

Overall, the card has a small tendency to give the advantage to the player with the most minions. Although the targets are selected randomly, since two of the three inventions with targeted effects offer beneficial effects, having more minions when playing Geblin may improve the player's odds slightly. The remaining invention, the

Homing Chicken, requires defending to benefit from its effects, making board control and the presence of Taunt minions in particular very useful.

Gelbin himself is a solid 6/6, but for 6 mana is slightly worse than basic minions such as

For many, this has led Gelbin to be regarded as a 'fun' card, but not a good choice for a strong strategic deck, while others choose to add Gelbin to their decks primarily for the random events that his inventions are capable of engendering, taking pleasure in their unpredictability.

With Goblins vs Gnomes, all of Gelbin's inventions are now Mechs.[1] This gives Gelbin some synergy in a Mech deck. However, capitalizing on this synergy may be difficult: an unsilenced

Homing Chicken will remove itself from the board on the start of your next turn, and the

Emboldener 3000 grants a +1/+1 buff to a random target at the end of the controlling player's turn. This tends to give the advantage to whichever player has the most minions on the field. It is therefore most desirable when the summoning player has control of the board, and can be particularly effective in decks designed around a lot of minions. Note that it takes effect at the end of the controlling player's turn, giving them a chance to remove any hostile targets before the buff is granted.

When playing against the Emboldener, players may wish to quickly check the odds for one of their minions being affected by the Emboldener. Since the Emboldener by default has 0 Attack, and has no Taunt ability, when controlling the majority of minions on the battlefield, it often pays to allow the Emboldener to survive for a few extra rounds, in order to empower your own minions.

Note that the Emboldener is quite capable of buffing itself, making it a capable 1/5 minion.

Card draw is one of the most important aspects of Hearthstone. With a draw of three cards,

Homing Chicken is one of the stronger card draws in the game. However it must survive through one of your opponent's turns with its measly 1 health to grant you cards, since Homing Chicken does not self-destruct until the start of your next turn. This makes its value very reliant on your current board position, your opponent's hand, and the number of minions with Taunt you have in play.

Poultryizer is in play, a random minion is transformed into a 1/1

Chicken each round at the start of the possessing player's turn. The Poultryizer may target any minion, including itself and Gelbin Mekkatorque. It may also target a minion that has been reduced to 0 or less Health during the same Phase.[2]

The resulting transformation is almost universally bad for whichever hero it belongs to, unless the minion was already a 1/1, or a hexed

Frog. The effect will also remove all card text, which can provide at least some compensation for the transformation of minions such as

Venture Co. Mercenary. Chickens are however classified as Beasts, which can be useful in beast decks such as those often favoured by hunters.

Poultryizer tends to favour the player with the fewest (or weakest) minions on the board. It can therefore work well for decks designed around a lot of small minions, as there is little difference between a 1/1 Murloc and a 1/1 Chicken (Beast synergy aside). Poultryizer is most powerful when you are outnumbered in minions, as the chances of turning one of your opponents into chickens is greater. However, for this to be effective you ideally need to prevent it from being destroyed such as using a Divine Shield or a minion with Taunt.

However, Poultryizer has its moments. For example, with it transforming a minion at the start of your turn, if the opponent has used removal spells on your creatures during their turn, it may be guaranteed to transform one of your opponent's minions into a 1/1 Chicken. When facing the Poultryizer, players with few minions may wish to leave the Poultryizer alive, in the hope that it will transform one of their opponent's minions.

Repair Bot is another invention that favours the player with the most minions on the field. When the summoning player has control of the board, Repair Bot can be very useful, and can be used defensively as well as offensively.

Defensively: With many Taunt cards, Repair Bot can sustain your defensive wall for a very long time. Use your taunt minions to soak up (hopefully) non-lethal damage. Offensively: You can control the field with your minions. Attack your opponent's minions while keeping your minions alive. Avoid killing off your own minions. Repair Bot works best with taunt or by applying Stealth, as it becomes a high-priority target when it is played. The synergy between taunt minions and Repair Bot is amazing. Your taunt minions will soak up the damage, while your Repair Bot brings them back up to fighting shape!

Note that Repair Bot takes effect at the end of your turn, giving you a chance to remove all hostile targets for its heals before it makes its selection.

Also note that Repair Bot's effect does count as healing, and thus the

Auchenai Soulpriest will convert it into damage. The targeting of this effect can be confusing because while the effect will happen to a random target, only damaged characters are considered as possible targets. The Repair Bot will not attempt to heal (or damage in this case) a fully healed minion or hero. This can be used to do very high damage quite effectively, if you first ensure that all your own minions (and hero) are fully healed before the end of the turn. Dealing 6 damage to an already damaged minion will kill most minions, allowing for very cheap trades.

Gelbin Mekkatorque is the leader of the gnomes, from World of Warcraft.

Gelbin Mekkatorque is the current High Tinker of Gnomeregan, and is also styled "King of Gnomes".

Gelbin has been at the helm of the gnome race during some of its most difficult and trying times. Since his title is an elected one, the fact that he has held his position throughout such hardship is a testament to the love his people have for him.

A brilliant inventor, Gelbin Mekkatorque rose quickly to prominence among the meritocratic gnomes with his innovative designs and creative problem-solving skills. He built the very first functioning mechanostrider, assisted in the development of the dwarven siege engine, and was instrumental in the creation of the Deeprun Tram running from Ironforge to Stormwind City.

Although one wouldn’t know it from looking at him, the loss of Gnomeregan weighs heavily on the high tinker. He was unprepared for the invasion that swept through his beloved city, and he was betrayed by a trusted advisor who convinced him to react hastily, resulting in unnecessary deaths. Now Mekkatorque’s brilliant mind has taken on a surgical focus with one single outcome: the retaking of Gnomeregan.