This article is using {{Card template}}.
See Help:Style guide/Card for how to edit this kind of article.
Edit this article
Gazlowe
2085 • GVG_117
Regular 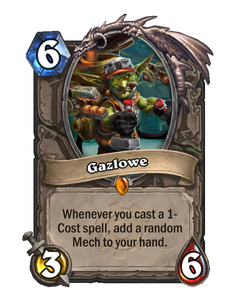 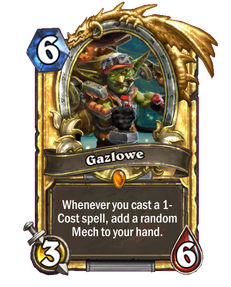 Dimensions: Full • 330 x 410px
Elite
Whenever you cast a 1-Cost spell, add a random Mech to your hand.
Flavor text

Gazlowe was voted "Most Likely to Explode" in high school. 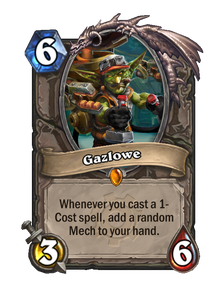 Gazlowe is a legendary neutral minion card, from the Goblins vs Gnomes set.

Spare Parts are all 1 mana spells. You can use minions like Mech-Bear-Cat and Mechanical Yeti to generate them. Gazlowe would fit in a paladin deck, because of the paladin's high number of 1-mana spells, such as Noble Sacrifice, among the other Paladin secrets. Several shaman decks utilize Earth Shock and Lightning Bolt, allowing for synergy with Gazlowe.

In terms of specific class cards, all classes have at least one 1 mana spell, such as Whirlwind, Mirror Image, and Mortal Coil. In terms of class-specific cards, the Paladin, with 9 1 mana spells, the majority of which are utility effects and secrets, allows Gazlowe to work well. However, Gazlowe is difficult to make a functional deck around, as it bears the burden of needing all the 1 mana spells that class has, and many spare part cards in order to gain full value. As a result, decks centred around Gazlowe often result in gimmicky and ineffective decks.

Gazlowe often needs to have the spells played as soon as he enters play, in order to gain value. Cards which are frequently used, such as Desperate Measures, Twin Slice and Tome of Intellect are best used to fit into decks with Gazlowe in them.

A list of collectible Mech minions in Standard and Wild can be found here.

Summon
Keep it quick kid, I ain't got all day.
Attack
Oh no you di'int!

Gazlowe is the official leader of Ratchet in the Horde-aligned territory of the Northern Barrens. He was formerly the Chief Engineer of the Horde engineering works in Durotar, and while keen to remain neutral towards the Alliance, he has no love for them and retains strong relations with the Horde.