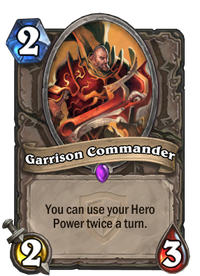 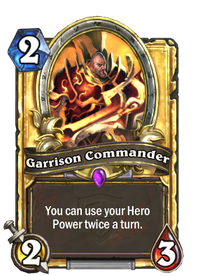 You can use your Hero Power twice a turn.
Flavor text

He'll never admit it, but he pushes you hard because he really cares about you.

Garrison Commander is an epic neutral minion card, from the Grand Tournament set.

Garrison Commander can be obtained through The Grand Tournament card packs, or through crafting.

Example: Whatever the mean you used to get a Garrison Commander under your control (by playing it, or by a summon, mind control or transform effect), it will refresh your eligible Hero Power during the following Aura Update steps, and will stop doing so as soon as you lose control of it (for example by being killed, returned to the hand or mind controlled).[1]

Best used for Inspire decks to trigger Inspire effects twice in the same turn. Especially useful when you have mana to spare, but no cards to play.

Garrison Commander is most powerful when doubling up replacement hero powers like those provided by Justicar Trueheart, Hero cards, and Saviors of Uldum quests. Cards that can reduce the hero power to 1 mana like Raza the Chained and Genn Greymane make the effect easier to cast.

This card's title appears to refer to the garrison game feature, introduced to World of Warcraft with Warlords of Draenor, that allows the player to manage a bustling garrison of their faction's forces. Players must first build their base, choosing which buildings to construct, and where, with each lending special bonuses and offering special quests. Players can also recruit, train and command followers, sending them off on missions and raids. Other features include a garrison mine, herb garden and fishing shack, which the player can work at to gather resources, and the shipyard, added in Patch 6.2, which allows players to send destroyers, battleships, submarines and more off on long-range sea missions around Draenor's main continent.

With the player consistently referred to as "Commander" by the inhabitants of the garrison, this card appears to represent a human player character.