This article is using {{Card template}}.
See Help:Style guide/Card for how to edit this kind of article.
Edit this article
Galakrond, the Wretched
57329 • DRG_600
Regular 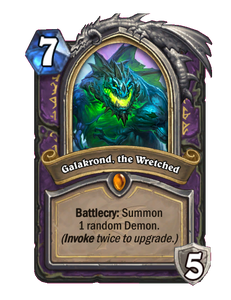 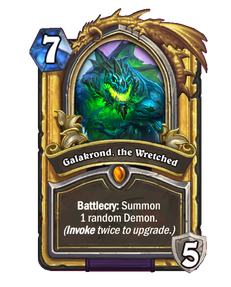 Fel-flames slowly writhed around the skeleton, until the great bones knit themselves together into a demonic monstrosity. Rafaam shielded his face from the heat but could not hide his grin. 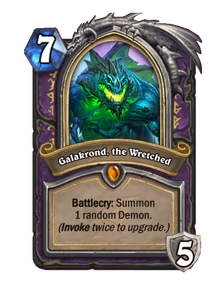 Galakrond, the Wretched is a legendary warlock hero card, from the Descent of Dragons set.

Regular Galakrond, the Wretched is obtained by owning a Descent of Dragons pack and going to Open Packs menu. It is uncraftable and cannot be crafted or disenchanted.

Golden Galakrond, the Wretched can be obtained through crafting only. 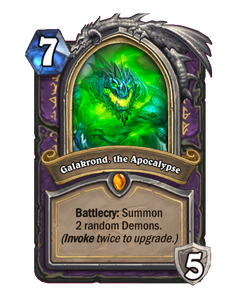 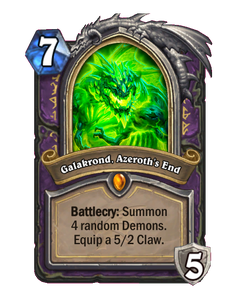 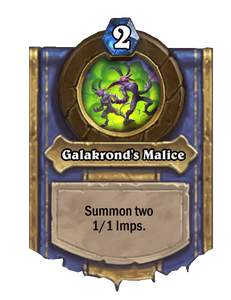 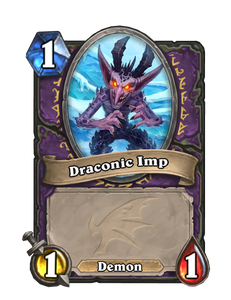 Galakrond, the Wretched's Invoke effect is highly versatile, and has its place in both aggressive Zoolock decks and in control decks. His Invoke effect will give you a constant stream of tokens for putting pressure on the opponent, and can be used with cards like Grim Rally and Sea Giant to further a Zoolock's game plan. His Invokers likewise work well in a Zoo strategy: Dragonblight Cultist can threaten a large amount of damage if played on a wide board, Fiendish Rites buffs your board, Devoted Maniac can be used to squeeze in damage against a stubborn Taunt or otherwise troublesome minion. and Veiled Worshipper provides a ton of card draw while barely sacrificing tempo. In such decks, Galakrond's Invoke is often more impactful than the threat of Galakrond himself, since Zoolock decks generally aim to finish the game before having to play Galakrond. That being said, the Demons summoned by an upgraded Galakrond's Battlecry can provide a tempo swing to help turn around a game gone wrong.

On the other hand, in slower decks the Invoke package gives the deck a decently strong early game to keep up against aggro decks and the stream of 1/1s his Hero Power gives provides consistent pressure, and more useful than Life Tap when running low on cards. The Imps also make for great fodder to sacrifice for Plague of Flames and Sacrificial Pact, allowing them to draw out the game longer.

This version of Galakrond is one of five forms he takes in Descent of Dragons, each catering to a League of E.V.I.L. member. This incarnation is reanimated by Arch-Villain Rafaam's Fel magic and appears to be able to use the fel to call demons to it's command.