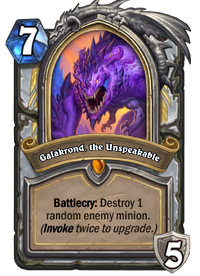 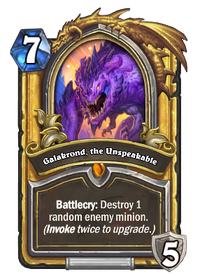 Galakrond, the Unspeakable is a legendary priest hero card, from Descent of Dragons set.

Regular Galakrond, the Unspeakable is obtained by owning a Descent of Dragons pack and going to Open Packs menu. It is uncraftable and cannot be crafted or disenchanted.

Golden Galakrond, the Unspeakable can be obtained through crafting only. 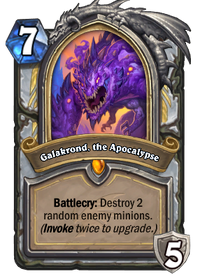 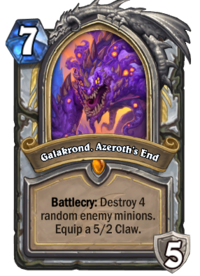 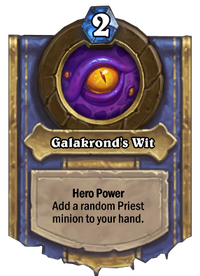 Galakrond, the Unspeakable generates constant, unpredictable value through his Hero Power and Invoke, giving the Priest a significant amount of resources throughout the game. His Battlecry when Invoked is powerful, destroying multiple enemy minions while leaving your minions, with the 5/2 Claw adding extra board control or damage. Even while not fully Invoked, Galakrond can destroy a single enemy minion while also swapping you into his value-based hero power, which can turn a neutral game in your favour. Galakrond also enables Fate Weaver, which has an effect highly valuable for control and OTK decks.

Disciple of Galakrond and Time Rip are average, low-tempo cards on their own, while Devoted Maniac and Shield of Galakrond fare worse. Because of this, it's possible to run Galakrond without any supporting cards, and simply use him as a one-time kill spell and value generator in Control mirrors. The quality of the minions you can get have a large variance. While there are some good well-rounded cards like Sandhoof Waterbearer and Skeletal Dragon in the minion pool, there's also the risk of generating bad or situational minions like Test Subject or Lightwell as well.

Galakrond's Wit is a slow, value-based hero power, meaning switching to Galakrond can be a tempo minus for several turns. Trading away Lesser Heal can lead you to a steady loss as you gradually lose health, especially if you're not generating good minions. As such, against an aggro or tempo deck Galakrond is best played after you've already secured the game, when you can safely use the hero power for an endless stream of fuel. Against control and combo decks, playing Galakrond should instead be prioritized as the healing is less important and the minions can be game-winning. If you haven't played him yet, Kronx Dragonhoof is a great way to offset Galakrond's inherent tempo disadvantage.

Princess Talanji will play every minion you've generated from Galakrond, making her a powerful synergistic pick with Galakrond.

This version of Galakrond is one of five forms he takes in Descent of Dragons, each catering to a League of E.V.I.L. member. This version was reanimated by Madame Lazul and the power of the Old Gods. Thus, Galakrond the Unspeakable is covered with the tentacles and additional eyes that signify their corruptive influence.