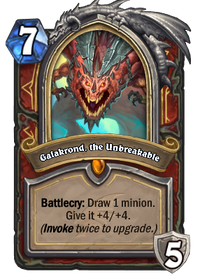 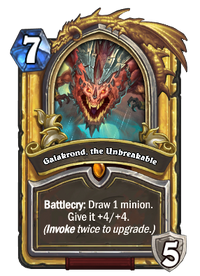 The ground quaked beneath the behemoth as Dr. Boom continued: "…with over 400 TONS of solid Storm Silver plate." Then he beeped a small remote. "And luxury spikes!"

Galakrond, the Unbreakable is a legendary warrior hero card, from the Descent of Dragons set.

Regular Galakrond, the Unbreakable is obtained by owning a Descent of Dragons pack and going to Open Packs menu. It is uncraftable and cannot be crafted or disenchanted.

Golden Galakrond, the Unbreakable can be obtained through crafting only. 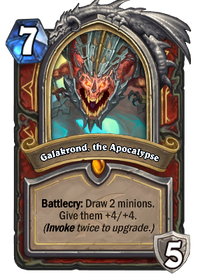 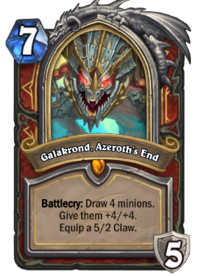 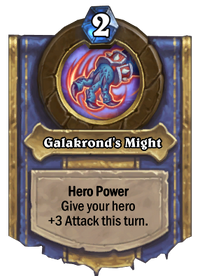 For Warriors, Galakrond provides a sizable amount of Attack to your hero with each Invoke, which add ups to a significant amount of Attack over time. This lets Galakrond Warrior control the early game or deal face damage regularly. Because of this, Galakrond fits better in an aggressive deck to capitalize on the extra damage he grants, though midrange and control builds can also capitalize on the free removal as they build Galakrond up over the game.

Galakrond's Battlecry draws minions and gives them a large stat boost, which adds a lot of pressure on board, giving them an extra push or two needed to finish off A weakened opponent. Scion of Ruin is an extremely powerful card to pull with Galakrond, giving you three 7/6 minions with Rush for a very low cost. Scrap Golem is also a good pull, giving you an 8/9 Taunt minion that has a Deathrattle which increases armour by 8. They need to not be drawn before playing Galakrond, however, further emphasizing pushing aggression. Dedicated Galakrond builds can usually afford to wait until he reaches Azeroth's End to play him for maximum value, as Warrior has many board control tools to complement the Invoke to hold back the enemy and Galakrond himself offers no real tempo advantage when played. The Dragon Claw combined with Galakrond's hero power can easily deal 16 damage at least (more if stacked with Invokes), enough to smash through weakened opponents, and the heavily buffed minions can easily finish off opponents that survive Galakrond's onslaught.

Galakrond fits well in a Pirate Warrior deck, since Galakrond and pirates both compliment each other's strengths - the only counteractive interaction involves Ritual Chopper and Hoard Pillager.

You could include Galakrond with Hack the System to finish the quest quicker, but adding both means you'll lose Anraphet's Core once you turn into Galakrond.

This version of Galakrond is one of five forms he takes in Descent of Dragons, each catering to a League of E.V.I.L. member. This incarnation was reanimated by Dr. Boom's mad science, using metal made from Storm Silver Ore to provide the Father of Dragons with even greater destructive power.