This article is using {{Card template}}.
See Help:Style guide/Card for how to edit this kind of article.
Edit this article
Gahz'rilla
2017 • GVG_049
Regular 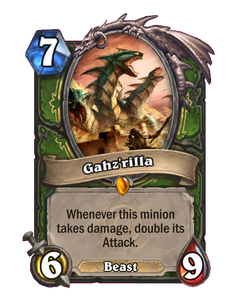 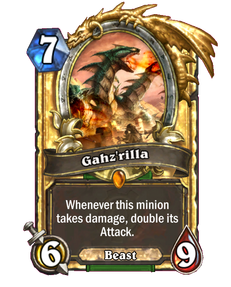 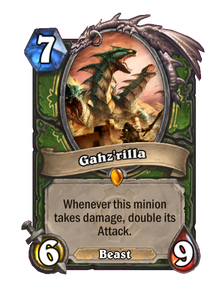 Gahz'rilla is a legendary hunter minion card, from the Goblins vs Gnomes set.

Gahz'rilla's triggered effect functions through an enchantment that directly doubles the minion's current Attack. The enchantment can stack, with each application doubling the minion's Attack again. This means that each time Gahz'rilla takes damage, its Attack will be doubled from its current value. Note that Inner Rage and Cruel Taskmaster apply the buff before Gahz'rilla triggers on the damage.[1]

Calculating the result of Gahz'rilla's effect in advance can be tricky. The basic rule for multiple enchantments or 'buffs' is that each is applied to the minion in the order in which they were granted. When a temporary enchantment is removed without removing other enchantments, the consequences of the enchantment stack are therefore recalculated. The one exception is aura buffs, which appear to be granted after all other enchantments have been applied, even if the aura was in place prior to the other buffs being gained.

Gahz'rilla's effect will therefore act upon any other enchantments that were applied beforehand, but not upon buffs which are applied afterwards,[2] and not upon any aura buffs.[3]

Gahz'rilla's triggered effect does include Attack granted by other enchantments, such as that of Defender of Argus. If a Gahz'rilla who has been buffed by a Defender of Argus to 7 Attack takes damage, its Attack will be increased to 14.

Gahz'rilla's buff works through doubling the amount of Attack produced by the combination of the minion's base Attack and any modifications provided by pre-existing buffs. This means that +Attack buffs granted after dealing damage to Gahz'rilla will not have their effects doubled.[2]

Gahz'rilla's triggered effect does not take into account Attack gained from auras, such as Timber Wolf or Raid Leader.[4] When the triggered effect is activated, Attack granted by auras will not be included, but the amount will still be applied on top of the Gahz'rilla's Attack once the doubling has occured. The basic rule for this appears to be that aura buffs are added to the minion's stats after all other effects.

If you can keep it alive for one turn (or combo it with a Tundra Rhino) and any cards that deal a small amount of damage like Arcane Shot, Rapid Fire, Elven Archer, or Loose Specimen, you can keep doubling its damage to absurd levels. Gahz'rilla's cost can be reduced by Scarlet Webweaver, giving more options for the following turn.

Note that its effect will not trigger while under Immune given from Bestial Wrath since it is not technically receiving damage and temporary Attack boosts like Timber Wolf will not be doubled.

"Legend has it that Gahz'rilla was an adored pet of the Old Gods, or even a demigod in her own right. Whatever the truth is, the Sandfury trolls have worshiped this monstrous hydra for thousands of years. Ever wary of the beast's icy wrath, the trolls will only rouse Gahz'rilla when they have plentiful sacrifices to sate the ravenous creature's appetite." - Dungeon Journal

Gahz'rilla is a level 48 elite hydra boss summoned in Zul'Farrak.

Long ago, when trolls used to occupy the land of Tanaris, they built up Zul'Farrak, the sand troll city in Tanaris, with a sacred pool. From that pool the trolls summoned the huge hydra Gahz'rilla, so fierce that even her scales crackle with energy. The trolls worshipped her as a deity, but the summoning of Gahz'rilla is a well-kept secret of the trolls. Gahz'rilla is said to be a demigod.