Hearthstone Wiki
Register
Don't have an account?
Sign In
Advertisement
in: All cards, Wild format cards, Pages with no result queries, Goblins

This article is using {{Card template}}.
See Help:Style guide/Card for how to edit this kind of article.
Edit this article
Gadgetzan Auctioneer
932 • EX1_095
Regular 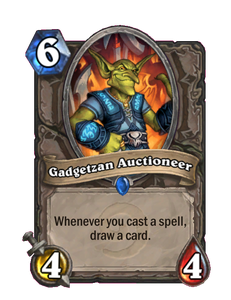 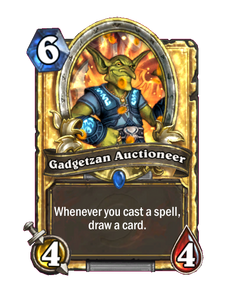 He used to run the black market auction house, but there was just too much violence and he had to move. 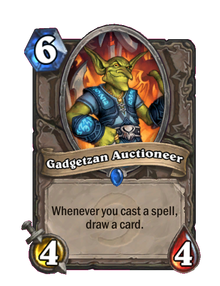 Gadgetzan Auctioneer is a rare neutral minion card, inducted into the Legacy set, formerly from the Classic set. 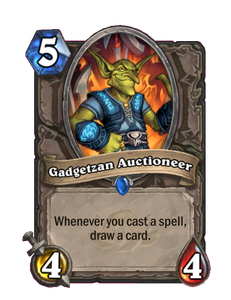 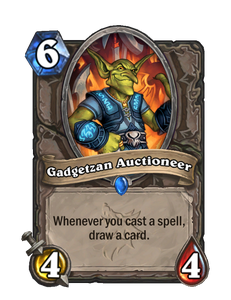 Two copies of regular Gadgetzan Auctioneer are obtained for raising sum of all your class levels to 33.

Two copies of golden Gadgetzan Auctioneer (Core) are obtained for winning 1000 games across all classes.

Gadgetzan Auctioneer (Core) is uncraftable and cannot be crafted or disenchanted.

Capital of the Steamwheedle Cartel and home to goblinhood's finest engineers, alchemists, and merchants, the neutral goblin trading outpost of Gadgetzan is the only spot of civilization in the entire desert of Tanaris. Why the goblins chose to build their trading town in such an inhospitable location is anyone's guess, but here weary explorers can find many modern amenities, as well as a place to escape from the blistering sun and other dangers of the desert.

Rising out of the northern Tanaris desert, Gadgetzan (Gadgetzar or Gadgetar in some tongues) is the headquarters of the Steamwheedle Cartel, the largest of the Goblin Cartels. Although it used to be surrounded by desert, since the Shattering it is now a prime beachfront property. Some of the best goblin engineers, miners and alchemists ply their trade here. The goblins believe in profit above loyalty, thus Gadgetzan is considered neutral territory in the Horde/Alliance conflict. Anyone with a fat wallet or services to offer is welcome in Gadgetzan. Both governments officially recognize goblin neutrality, and for those who don't, the streets are heavily patrolled by goblin bruisers ready to pound to a pulp anyone disrupting their trade by instigating conflict.