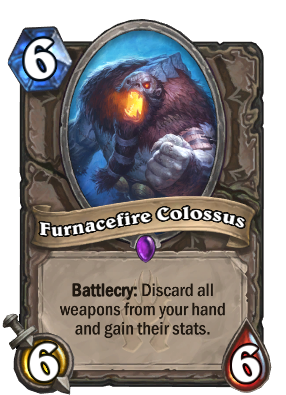 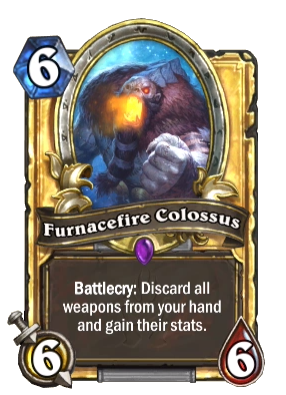 Uncollectible
Battlecry: Discard all weapons from your hand and gain their stats.
Flavor text

Smelts in his mouth, not in your hand.

Furnacefire Colossus is an epic neutral minion card, from the Knights of the Frozen Throne set.

Furnacefire Colossus can be obtained through Knights of the Frozen Throne card packs, or through crafting.

This card is used for decks that run multiple large weapons, and for cases where it may not be feasible to fully use up all weapons at hand, you can sacrifice them for a large minion instead. While this card has the potential to be extremely powerful, it should be used with caution as it's still vulnerable to hard removal and silence effect.

Shamans can give it a Doomhammer which turn it as big as an Ultrasaur with 1 extra Attack for 4 mana less while ignoring the Overload. Warriors have the benefit of using Forge of Souls to draw weapons directly, weapons like Gorehowl and Arcanite Reaper to give it a huge Attack boost, and Charge to guarantee that it can attack at least once . Other classes do not have very efficient weapons to feed this with.

If using Spectral Cutlass, this card can be used to discard extra weapons you generate that you will never equip. This is helpful to avoid clogging up your hand in those decks, although it is a very fringe use.

The same dark sorcery used to command the Scourge's powerful abominations was utilized to even greater effect in the harsh and distant realm of Northrend. Here the Lich King focused his malefic powers on flesh giants: nightmarish creatures that make abominations look tame by comparison.

Scourge minions assembled flesh giants and abominations in a similar manner, piecing them together out of body parts from numerous corpses. Unlike abominations, though, the "spare parts" used to create flesh giants were harvested from multiple types of fearsome Northrend giants. These living battering rams employed tremendous brute strength in carrying out the inexorable will of their loathsome master.