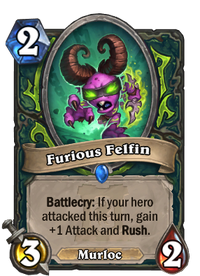 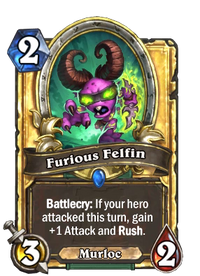 Battlecry: If your hero attacked this turn, gain +1 Attack and Rush.
Flavor text

Signature moves include Eye Bream, Feast of Soles, and Metamorphofish.

Furious Felfin is a rare demon hunter minion card, from the Ashes of Outland set.

Because of Demon Hunter's one mana hero power, Demon Claws, this card can easily get the bonus of 1 attack and Rush. With this bonus, the card becomes a two mana 4/2 that can attack minions instantly, and can be used to remove minions early in the game. While it is a murloc, Demon Hunters have no cards that synergize with murlocs, so this minion's murloc typing is difficult to take advantage of.

Furious Felfin is a murloc demon hunter. Unlike other unusual murloc class associations in Hearthstone, however, murloc demon hunters do appear in World of Warcraft, such as Murgulis. The title "Felfin" suggests a connection with the Felfin tribe of murlocs mentioned in Murgur Murgurgle's lore.