Hearthstone Wiki
Register
Don't have an account?
Sign In
Advertisement
in: All cards, Wild format cards, Elementals,
and 2 more

This article is using {{Card template}}.
See Help:Style guide/Card for how to edit this kind of article.
Edit this article
Frozen Crusher
41253 • UNG_079
Regular 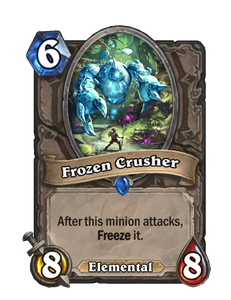 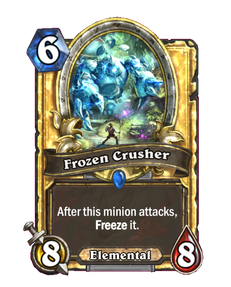 Goes by the online handle "KoolKrusher99." 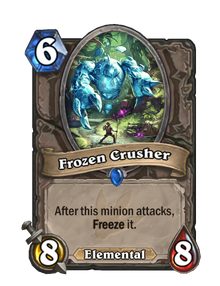 Frozen Crusher is a rare neutral minion card, from the Journey to Un'Goro set.

While this minion has very high stats for its cost, the fact that it freezes itself after attacking means it will be useless every other turn. Its weakness can be mitigated by giving it Taunt via cards like Sunfury Protector or remove its weakness entirely with Silence effects like Purify.

In Arena, this card is a strong pick despite its weakness, as it is still able to attack for 8 damage the turn after it's played and its huge stats alone makes it a good soft taunt.

This minion can be useful against the Sapphiron boss in the Curse of Naxxramas adventure, as it can mitigate Sapphiron's Hero Power Frost Breath by Freezing itself every other turn, while also dealing high amounts of damage.