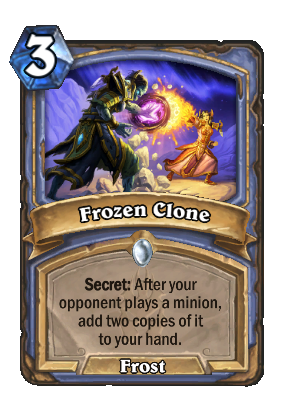 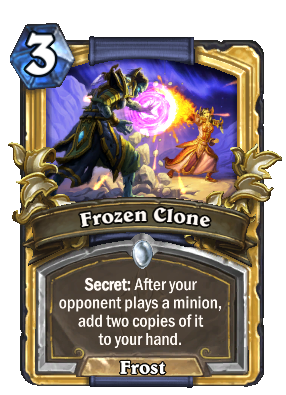 Secret: After your opponent plays a minion, put 2 copies of it into your hand.
Flavor text

Frozen Clone is a common mage spell card, from the Knights of the Frozen Throne set.

Frozen Clone can be obtained through Knights of the Frozen Throne card packs, or through crafting.

Frozen Clone is a mixture between Mirror Entity and Duplicate. Much like Mirror Entity, Frozen Clone allows you to benefit from an opponent's minion, with the extra bonus that your opponent won't be able to counter the minion immediately, you can use that minion's Battlecry, and you get an extra one. Unfortunately, you have to pay the minions' mana cost, which combined with the upfront cost of 3, makes this card very slow. Your opponent can also turn this card against you, playing an undesirable minion that clogs your hand up.