Hearthstone Wiki
Register
Don't have an account?
Sign In
Advertisement
in: All cards, Wild format cards, Pages with no result queries, Trolls

This article is using {{Card template}}.
See Help:Style guide/Card for how to edit this kind of article.
Edit this article
Frothing Berserker
654 • EX1_604
Regular 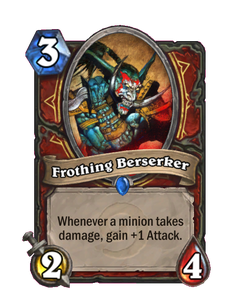 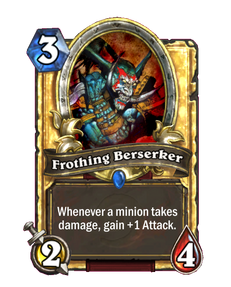 He used to work as an accountant before he tried his hand at Berserkering. 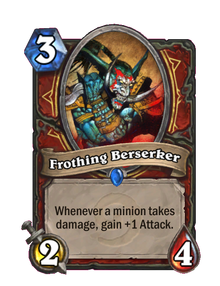 Frothing Berserker is a rare warrior minion card, inducted into the Legacy set, formerly from the Classic set. 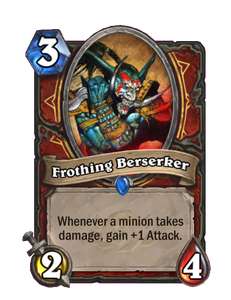 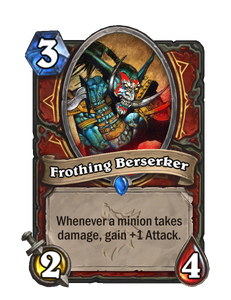 Two copies of regular Frothing Berserker are obtained for raising warrior to level 4.

Frothing Berserker (Core) is uncraftable and cannot be crafted or disenchanted.

Troll Berserkers were a trainable Horde unit in Warcraft II, and returned in Warcraft III. Berserking is a troll racial ability in World of Warcraft that grants the troll increased haste for 20 seconds, allowing them to attack and cast more quickly.

Troll berserkers are a bloodthirsty sect of trolls dedicated to the total annihilation of their hated enemies, the elves. Suffering numerous experiments with strange chemicals and potions by the goblin alchemists, the berserkers have had many strange abilities bestowed upon them that make them all but unstoppable in the heat of battle. Berserkers are hardier and stronger than most trolls, effectively transforming them into a veritable whirling cyclone of death and destruction.