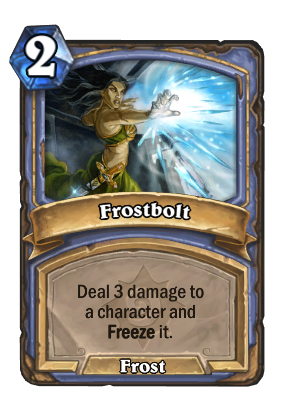 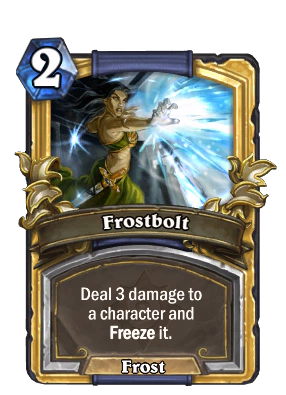 Deal 3 damage to a character and Freeze it.
Flavor text

It is customary to yell "Chill out!" or "Freeze!" or "Ice ice, baby!" when you play this card.

Frostbolt is a mage spell card, inducted into the Legacy set, formerly from the Basic set. 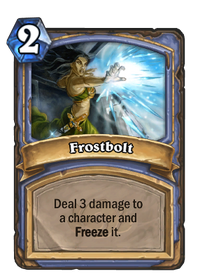 Two copies of regular and golden Frostbolt are automatically given after the player completes the Ranked's New player experience system, unlocking Wild and Classic format.

Frostbolt is a very useful direct damage spell in the mage's arsenal. Less powerful than Fireball, and less far-reaching than Arcane Explosion, Frostbolt fills a niche for finishing single targets with 2 or 3 health. Its freeze effect provides extra utility, useful for stopping higher-health minions in their tracks, until they can be properly disposed of. This also works against heroes, making it excellent for delaying a charging warrior or back-stabbing rogue from unleashing their latest weapon upon you.

Frostbolt works particularly well as a nuke when combined with Ice Lance, allowing mages to deliver devastating amounts of burst damage in a single turn.

Frostbolt is a Frost mage spell from World of Warcraft that deals direct damage and chills the target, slowing their movement by 50%.