This article is using {{Card template}}.
See Help:Style guide/Card for how to edit this kind of article.
Edit this article
Frost Nova
587 • CS2_026
Regular 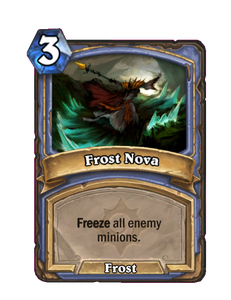 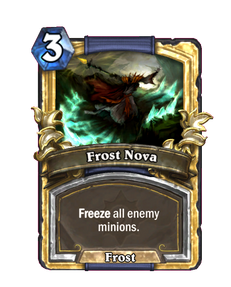 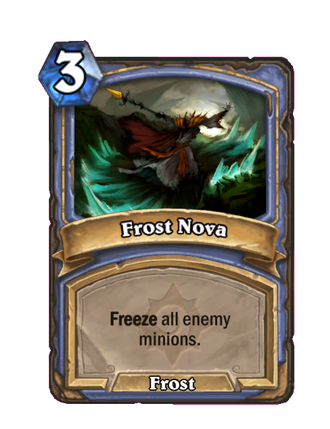 Frost Nova is a mage spell card, inducted into the Legacy set, formerly from the Basic set. It applies Freeze to all enemy minions. 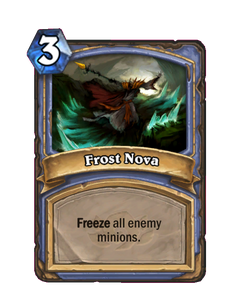 Regular and golden Frost Nova are uncraftable and cannot be crafted or disenchanted.

Note that this spell only freezes the enemy minions. This prevents them from attacking the next turn, but does nothing to remove them from the board. For this reason Frost Nova is ideal for buying time, whether to get a selection of defenders onto the board, or to draw the right card with which to defeat them. This makes Frost Nova particularly useful in a mage aggro deck, where this card can buy the mage a free round to nuke their opponent.

This card is most notable for its use in Freeze Mage decks, due to its heavy stall component, and as a board clear in combination used with

Doomsayer. By delaying damage, Freeze effects like this one can buy the mage sufficient time to find the cards they need to deal sufficient direct spell damage to defeat their opponent.

As with all Freeze effects, this spell works with

Ice Lance, allowing it to deal 4 damage to a frozen enemy.

Frost Nova is one of the mage's core spells in World of Warcraft. It is a point-blank AoE effect that deals very light damage and freezes all enemies within 12 yards of the mage, rooting them in place for 8 seconds. Damaging frozen targets has a chance to break them free. Frost Nova is one of the mage's basic kiting abilities, used to allow the mage to deal damage to melee enemies while keeping them at arm's length. Its AoE nature makes it ideal for freezing several mobs, and allows the mage time to retreat to a safe distance, or escape entirely.