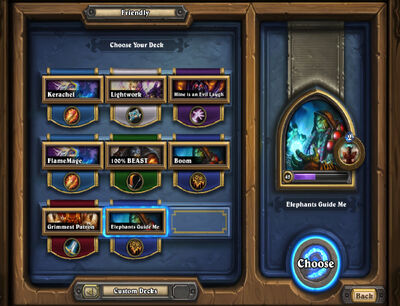 Friendly Challenge, also known as Friendly Play, is a game mode in which players can battle against other players on their friends list in private unranked matches, often referred to as duels. Offering fewer rewards than other modes of play, duels are designed to allow friends to challenge each other to casual matches.

Players can choose to issue three types of Friend Challenge: Standard format, Wild format, and Tavern Brawl. The first two are regular matches played in either Standard or Wild format, requiring each player to choose a constructed deck appropriate to the chosen format. The last type of duel queues both players into the current Tavern Brawl (assuming one is currently available), using either specially constructed Brawl decks or premade decks, depending on the Brawl. 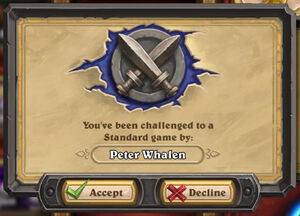 To issue a Friendly Challenge the player must open their friends list and click on the dual-bladed icon to the right of a player who is online on Hearthstone, but not currently in a match. This will issue them a prompt challenging them to a duel with the player, which they can accept or decline. Accepting the challenge will take both players to the Friendly screen, a selection screen very similar to the Play mode screen, where each player can choose their deck. Once both players have chosen their decks, the match will commence.

At the conclusion of a Friendly Challenge, players are returned to the Friendly screen, from which they may change their choice of deck, challenge their opponent to another match, or return to the main menu.

Friendly Challenge is the only game mode in which players know the identity of their opponent before the match begins. This can allow for some strategic anticipation, both in play and in choice of deck. When two players know each other (and their decks) very well, duels can present the opportunity for a level of strategy not often seen in other types of play.

While the opponent is known, each player's deck is not revealed before the duel commences. When playing a series of matches, this can allow players to surprise the other with a deck intended to counter their opponent's previous deck. However, bear in mind that the opponent may also have chosen a different deck. Long series of duels may in this way begin to resemble a game of rock-paper-scissors.