This article is using {{Card template}}.
See Help:Style guide/Card for how to edit this kind of article.
Edit this article
Freezing Trap
519 • EX1_611
Regular 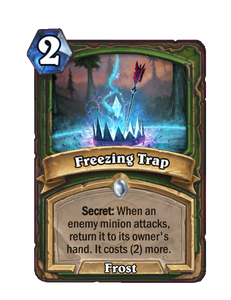 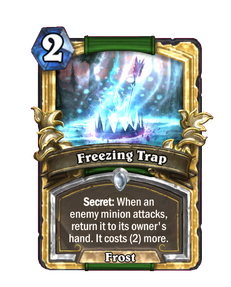 Click here for full resolution image
Secret: When an enemy minion attacks, return it to its owner's hand. It costs (2) more.
Flavor text

Freezing Trap is a common hunter spell card, inducted into the Legacy set, formerly from the Classic set. 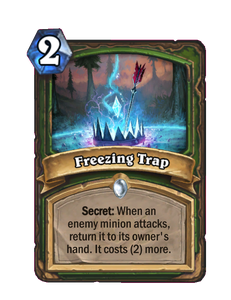 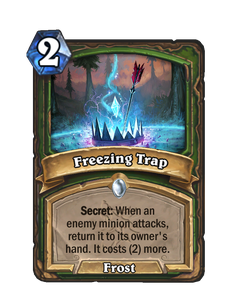 Freezing Trap (Core) is uncraftable and cannot be crafted or disenchanted.

Freezing Trap is a powerful return effect card that has the potential to set the opponent back quite a bit if it happens to return an expensive minion, but the hunter needs to be cautious when playing this card. If it returns an enemy minion with a strong Battlecry effect, it might end up being advantageous to the other player!

Using Freezing Trap on a minion that costs more than 8 mana may make it impossible for the controlling player to resummon it, due its summoning cost exceeding players' maximum of 10 mana. However, effects such as Alarm-o-Bot, Summoning Portal and Pint-Sized Summoner can counter such restrictions.

When playing multiple secrets, bear in mind that all eligible secrets are triggered in the order in which they were played, and that secrets which require specific targets will not be triggered if their target has been removed by another secret. For example, if a minion attacks a hunter who has played Explosive Trap followed by Freezing Trap, the Explosive Trap will activate first, dealing 2 damage to all enemies. If the trigger minion survives, Freezing Trap will activate and return it to the controlling player's hand; while if the trigger minion is destroyed, Freezing Trap will not activate, and will remain in place.

Note though that secrets which do not require specific targets will always activate once they have been triggered. If a hunter has played Freezing Trap before Explosive Trap, an attacking minion will be returned to its owner's hand, but Explosive Trap will still then take effect after the triggering minion has been returned.

Freezing trap can also act to counteract other secrets or render the effects redundant. For example, activating Misdirection followed by Freezing Trap will cause Misdirection's effect to be wasted, as the minion will be returned to the hand before it has the chance to attack its new target. Similarly, by returning the minion to the hand, a Freezing Trap following an Explosive Trap will effectively undo the damage caused to that minion by Explosive Trap.

Overall, Freezing Trap has a particularly antagonistic relationship with other secrets, because of its ability to prevent them from triggering or to negate their effects. Bear this in mind when playing Freezing Trap, and anticipate the order of events if the secrets are activated.

In World of Warcraft, Freezing Trap is a level 28 Hunter ability that causes the first enemy to approach the trap to be frozen. While frozen, the enemy is unable to take any action for up to 1 minute, although any damage caused will break the ice.