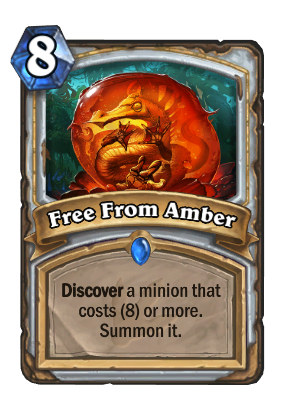 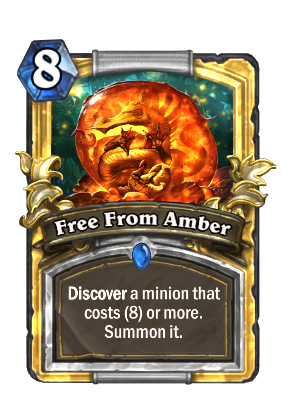 Discover a minion that costs (8) or more. Summon it.
Flavor text

Free From Amber is a rare priest spell card, from the Journey to Un'Goro set.

Free From Amber can be obtained through Journey to Un'Goro card packs, or through crafting.

Example: If Free From Amber discovers Deathwing, it will be summoned on the board, but its Battlecry will not activate, nor will the opponent's Mirror Entity.

This card can be seen as a somewhat more reliable version of Forbidden Shaping. While its mana cost isn't as flexible, it's less volatile and being able to choose which minion to discover means you can avoid awful results like Tortollan Primalist or C'Thun. Another advantage is that when it discovers a 9 or 10-mana minion, it will give more value for its cost.

One particular minion to look out for when discovered is Charged Devilsaur. Because its attack restriction is tied to its Battlecry, it can freely attack the enemy hero on the same turn.

Combos well with Summoning Stone and Medivh, the Guardian, which lets you bring out 16 to 18 mana worth of minions in a single turn, something Forbidden Shaping can't do.

This card's flavor text is a reference to the Jurassic Park film, specifically the scene where it is explained how the "dino DNA" was recovered.[1]