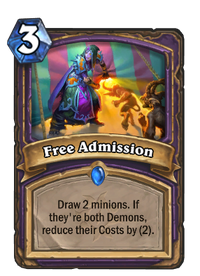 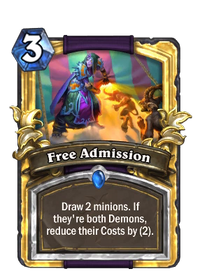 Draw 2 minions. If they're both Demons, reduce their Costs by (2).

Free Admission is a rare warlock spell card, from the Madness at the Darkmoon Faire set.

A variation on Sense Demons that instead tutors out any two minions from your deck while also adding a bonus if you happen to draw two Demons, making it an effective deck thinner on top of drawing possible combo pieces that aren't Demons. While the Cost reduction can be valuable for cheating out Demons in the same turn or subsequent turns to swarm the field - or better yet, reducing the Cost of Tickatus to make him easier to Corrupt - it's not something that you can guarantee unless you're playing a less reliable Spell-heavy build. Decks that need to reliably draw into Demons, such as a Soul Warlock trying to tutor out Spirit Jailer or Void Drinker, may want to stick to Sense Demons instead.

There is 1 achievement related to Free Admission.