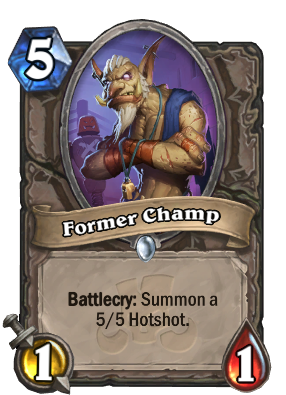 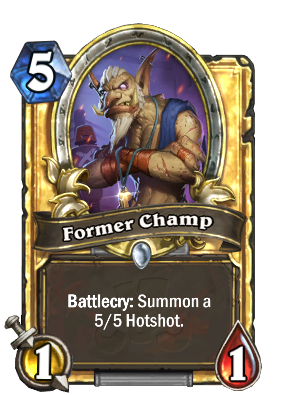 The last time he saw action, Undertaker ruled the meta.

Former Champ is a common neutral minion card, from the Rastakhan's Rumble set.

Former Champ can be obtained through Rastakhan's Rumble card packs, or through crafting. 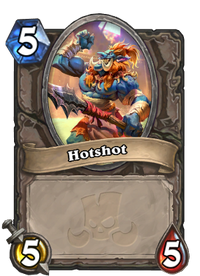 Former Champ is essentially a cheaper version of Big-Time Racketeer, offering a total of 6/6 stats for 5 mana, split between the 1/1 Champ and the 5/5 Hotshot. Overall it carries good value and is useful in Evolve Shaman, as players can use the 5/5 Hotshot and evolve the 1/1 Champ with cards like Unstable Evolution, Thrall, Deathseer, or Big Bad Voodoo. Players of Evolve Shaman have to be careful that they don't evolve their cheaper minions into Former Champ by mistake, as it is essentially useless without its Battlecry. Former Champ can also be played with the Shudderwock in order to summon a free 5/5 once Shudderwock is on the field, but this is fairly uncommon.