This article is using {{Card template}}.
See Help:Style guide/Card for how to edit this kind of article.
Edit this article
Force of Nature
493 • EX1_571
Regular 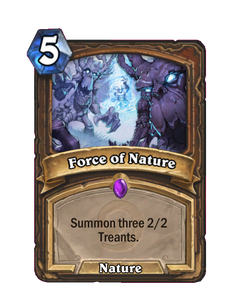 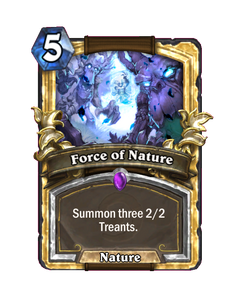 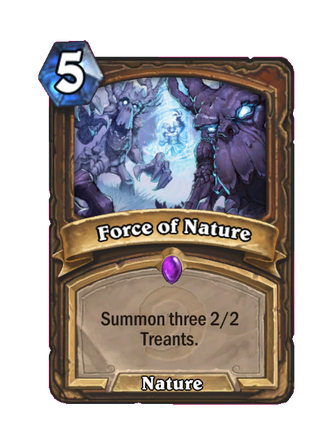 Force of Nature is an epic druid spell card, inducted into the Legacy set, formerly from the Classic set. 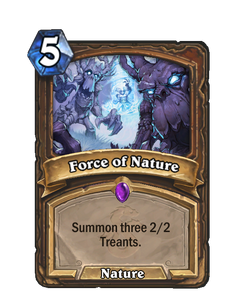 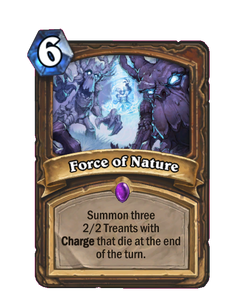 Force of Nature are obtained for raising druid to level 8.

Two copies of golden Force of Nature (Core) are obtained for winning 250 games as druid.

Force of Nature (Core) is uncraftable and cannot be crafted or disenchanted. 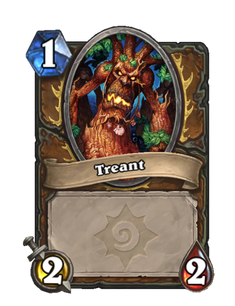 This card works well in decks with area of effect buffs, and in slightly slower Savage Roar decks that focus on building a board of multiple sticky minions. This strategy benefits the presence of a number of minions on the druid's board, regardless of their Attack; sticky minions like

Anubisath Defender, providing a midgame deck-positive way for both of these cards to activate. Force of Nature reduces

Aeroponics to 0 mana by itself, letting you refuel as well. It also synergizes with

Goru the Mightree to provide far more stats in the lategame.

Soul of the Forest.

Savage Roar. The card cost 6 mana, and the Treants summoned died at the end of the turn, but they also had Charge, allowing them to make immediate use of the extra Attack from Savage Roar. The combination cost 9 mana and could deal 14 damage directly from the hand (4 from each Treant and 2 from the hero), plus another 2 damage for each other minion on the druid's board. This was widely used as a druid finisher, by first reducing the opponent to within lethal, then playing the combo the next turn for a large burst of damage.

Blizzard had for a long time acknowledged the overinfluence of the druid's core cards, but it was not until the introduction of game formats that they decided to make changes to reduce druid decks' dependence on cards from the Basic and Classic sets - this change was one of them. Additionally, the effectiveness of the Force of Nature/Savage Roar combo was such that other deck types were less appealing and competitive, with many considering combo druid a monotonous and unchanging mainstay. The lack of interactiveness in its one turn kills may also have contributed to its being changed. Players were unable to prevent the basic 14 damage combo except through Taunts, with it necessary to keep an especially keen eye on their Health and Armor totals whenever playing against a druid.

Aside from its use to directly win games, Force of Nature was very effective for clearing the board. This could allow the druid to avoid defeat, or simply allow them to turn the tide and begin to dominate the battlefield. Given its common use as a win condition, the question of whether to use Force of Nature for removal was often a gamble as to which player would reach lethal first.

Force of Nature is a talented druid ability from World of Warcraft. It summons three treant guardians to assist the druid for 15 seconds, with the capabilities of the treants determined by the druid's specialization. For example, Restoration druids' treants will heal allies, while Balance druids' treants will attack and root enemies.

Commentary: "The new version of Force of Nature lowers its mana cost by 1, but removes Charge and makes the summoned Treants permanent—like the other Treants that Druids summon. This change also removes the powerful one-turn combo of Force of Nature and Savage Roar. Now, opponents will have a chance to deal with the threat that the Treants represent, and it won’t feel mandatory to always include the combo."