This article is using {{Card template}}.
See Help:Style guide/Card for how to edit this kind of article.
Edit this article
Forbidden Ritual
38454 • OG_114
Regular 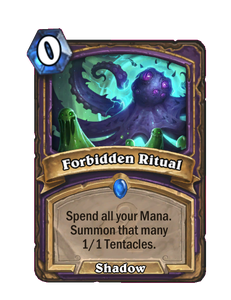 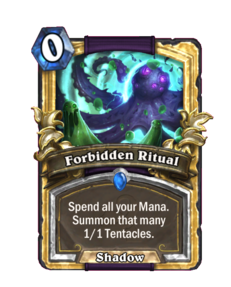 Actually, C'Thun gives his full support for this ritual. 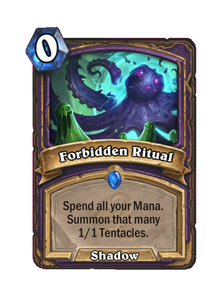 Forbidden Ritual is a rare warlock spell card, from the Whispers of the Old Gods set. 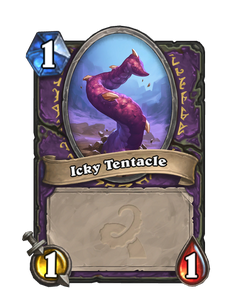 This is a very useful card for Zoolock. It is capable of activating Knife Juggler for up to 6 knife throws, or Darkshire Councilman for an immediate +6 Attack. It can also pave the way for a very cheap Sea Giant, or a 10/10 Frostwolf Warlord, although since the Ritual consumes all Mana when cast, it is not usually possible to play these minions until the next turn.

The downside of the Icky Tentacles summoned is that they are 1/1s and as such are very easily removed. Consecration, Swipe, Blizzard, Wild Pyromancer and any other form of AoE will kill them all, while random effects like Arcane Missiles and Flamewaker can quickly demolish their numbers.

This weakness can be turned into a strength through stat buffs like that of Spawn of N'Zoth or Stormwind Champion. Positive AoE effects such as these not only strengthen the Tentacles against being removed, but also double their damage potential. Tentacles also make good targets for Defender of Argus, their lack of special abilities making them nicely dispensable Taunts. In the case of Spawn of N'Zoth, it's best to play the Spawn the previous turn, so you can then trade it immediately after playing Forbidden Ritual. However, even 2/2 tentacles can be easily removed by most AoE.

The Tentacles can also be useful against random mind control effects like Sylvanas or Mind Control Tech. If you have two high value minions facing a vulnerable Sylvanas, playing Forbidden Ritual will force the opponent to either remove the Tentacles first, or trade the Sylvanas with a 5/6 chance of getting only a 1/1 minion. The former possibility can be removed through trading with Sylvanas on your own turn. Icky Tentacles can likewise be useful in certain situations with effects like Flamewaker or Knife Juggler, as a way to protect damaged higher value minions. An 8/1 Ragnaros the Firelord stands a good chance of not being hit if there are also 6 Icky Tentacles on the board, allowing it to survive another round.

Because the spell consumes all available Mana regardless of the number of minions summoned, it is worth counting the number of space on your board and considering using Life Tap, trading minions, or playing other cards first. Without The Coin or other 0 Mana cards, Forbidden Ritual usually cannot be followed by playing any other cards.