This article is using {{Card template}}.
See Help:Style guide/Card for how to edit this kind of article.
Edit this article
Fool's Bane
39417 • KAR_028
Regular 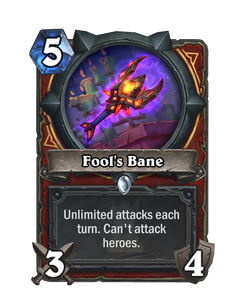 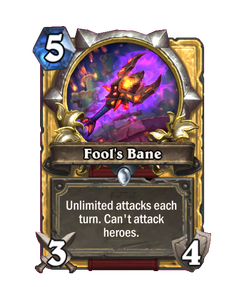 A fool and his bane are soon parted. 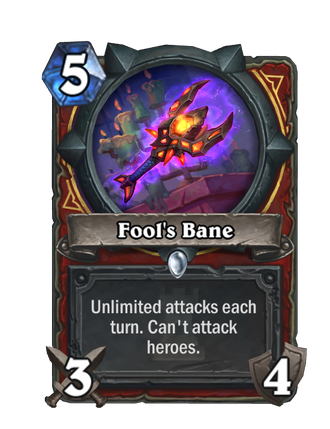 Fool's Bane is a common warrior weapon card, from the One Night in Karazhan set.

This weapon is a strong choice for board control, but its secondary effect prevents it from being used to whittle down or finish the enemy hero themselves. It is ideally used to clear up to four low-Attack minions in a single turn, or even more with weapon-durability boosting effects like

Bloodsail Cultist. Trading blows with higher-Attack minions, especially multiple blows if their Health is high as well, has the potential to devastate the wielder's own Health. Using this weapon rapidly is also a risk even against weaker minions without additional Armor to mitigate the sudden influx of damage.

Fool's Bane is a high-risk but potentially high-reward tool against Aggro decks, as many of them depend on a great many low-health minions, which this weapon can nearly clear out in one turn. Control Warrior archetypes can thus benefit from this card in conjunction with cards like

Shield Block to help with the Armor required for this tactic.

This card has its strongest synergy with

Violet Illusionist, allowing the hero to attack and cut down even the strongest minions without suffering any damage.

Fool's Bane is an epic one-handed mace that drops from