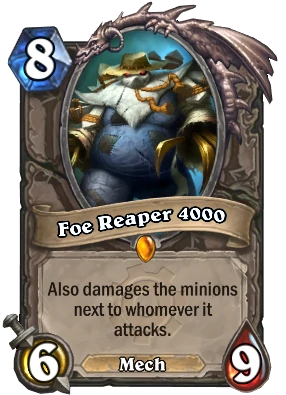 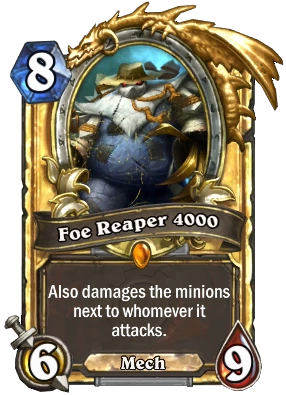 BG tavern minion
Also damages the minions next to whomever it attacks.
Flavor text

Foe reaping is really not so different from harvest reaping, at the end of the day.

Foe Reaper 4000 is a legendary neutral minion card, from the Goblins vs Gnomes set. 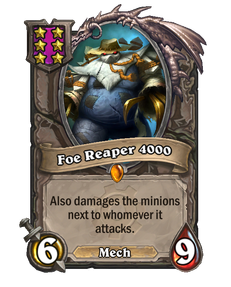 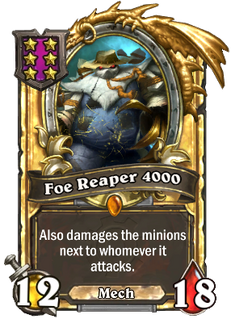 Foe Reaper 4000 can be obtained through Goblins vs Gnomes card packs, or through crafting.

It can be used to hit minions hiding behind Taunts, under Stealth or ones not desirable to attack directly, either because of high Attack, or because of additional abilities such as Water Elemental's Freeze ability.

Being a Mech it has synergy with cards such as Cogmaster and Tinkertown Technician. Players can reduce its cost to 7 Mana with Mechwarper, and Warriors can use Charge on the Foe Reaper on the same turn to allow it to attack immediately.

Since the Foe Reaper's main strength lies in attacking other minions, the opponent may try to neutralize it before it is able to attack.

Great for decks that go into late game and can maintain field advantage as the opponent will be low on cards and this minion can take out 2-3 other minions. A good Arena pick. As most classes will focus on getting minions over spells, in most situations this minion can survive a turn on an empty field. At first glance its stats do not appear to be worth it but its ability means in terms of minion combat, it can be considered an 18/9 (if it attacks other minions, not the opposing hero) for 8 mana.

Foe Reaper 4000 is a level 12 rare mob harvest watcher who appears at various spawn points in Westfall. It is on a 4-6 hour respawn timer.

Foe Reaper 4000 was later upgraded into the Foe Reaper 5000 by the Defias Brotherhood after the events of the Cataclysm, where it became a boss in the new version of the Deadmines. The card's art shows Foe Reaper 4000 in the boiler room of the Deadmines where its upgraded version is later fought; this is due to the art originally being commissioned to depict the 5000's Prototype Reapers from that dungeon.