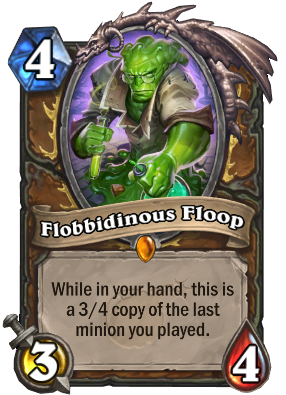 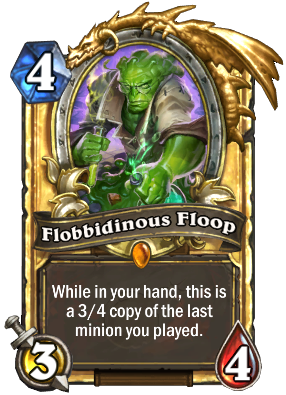 While in your hand, this is a 3/4 copy of the last minion you played.
Flavor text

Of all the scientists, he has the most knowledge (when measured in volume).

For the boss of the same name, see Flobbidinous Floop (boss).

Flobbidinous Floop is a legendary druid minion card, from The Boomsday Project set.

Flobbidinous Floop can be obtained through The Boomsday Project card packs, or through crafting.

With poor stats for his cost, Floop is best used to copy minions with powerful effects. Malygos is a prime target for this card's effect, as you will have a lot of mana left over for spells. If the original Malygos was not removed, or if you refilled your mana with Twig of the World Tree, this can be devastating. Other good cards to copy include Hadronox and The Lich King, letting you gain further value with their effects without having to pay the full cost again. As he transforms in your hand, Flobbidinous Floop can also be used to reuse Battlecry effects, like Giggling Inventor and Aya Blackpaw, or simply be played as a discounted or free 3/4 with in-hand cost modifications like Arcane Tyrant.

Note that Floop can be Recruited by Oaken Summons as he costs 4 mana, wasting his effect.

Flobbidinous Floop can also be used in druid Mecha'thun decks to counter or mitigate the effects of cards such as Demonic Project, Skulking Geist, and Dirty Rat.

Flobbidinous is unique to Hearthstone. Apparently a humanoid ooze scientist, he is a true master of "gloop science" (also known as biology).[1]

Ah, hello my little friend. Come in, come in! Welcome to my greenhouse! You mustn’t tarry long though, ha ha. I doubt that the humidity will agree with your delicate innards. I don’t suppose you brought another MLCH-MNCHR unit with you?

Ah, too bad. I expect Boom wants another progress report, then?

Floopulous! As you can see, it’s a jungle in here. In fact, this is the fourth time we’ve had to move to a larger facility to accommodate the growth of my experiments. The glorious greenery that surrounds you is just the beginning! Soon we’ll be growing super-sized versions of all sorts of vegetation. Hunger will be a thing of the past—not to mention the possibilities involved with the creation of entirely new, never-before-seen plant species!

That research has already borne fruit, if you’ll pardon the pun. I’m working on something I call a psychmelon. Not only will you think it’s delicious, it helps you use your melon! Ha!

The seeds of all sorts of ideas are germinating in my lab. The secret is my glorious gloop! Yes, gloop makes it all possible. Allow me to demonstrate with the help of Intern Kevin here. Alright, Kevin, if you’ll just fetch that vat of gloop for me. . .

Great gloopily floopily, Kevin, be careful not to trip over those roots—you’ll get precious gloop everywhere!

Why, Kevin! You’ve been glooped! Quickly, if you just rinse off in the emergency show—ah, nope. It’s too late. He’s dissolved. I’m so terribly, terribly sorry. What an unfortunate incident! Poor Kevin. If only he was an advanced, ooze-based lifeform like myself, he might have avoided the gloop’s effects. We’d all be so much safer if we were all ooze-based. . . . Hm.

But look! My glorious gloop is glowing! Fascinating! In addition to its incredible properties as an ultra-fertilizer, I hypothesize that the gloop stores the potential energy of the matter it dissolves. A most curious side-effect, but doubtless of no interest to Dr. Boom. We’re here to solve real problems, after all.

Ah, speaking of which, you’ll prune that bit involving poor Kevin from the final recording, won’t you? And would you please let Dr. Boom know that there’s an opening for a new assistant in my lab?