This article is using {{Card template}}.
See Help:Style guide/Card for how to edit this kind of article.
Edit this article
Floating Watcher
2068 • GVG_100
Regular 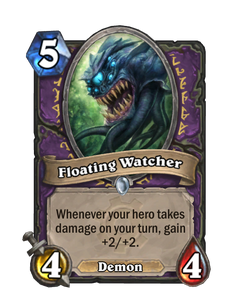 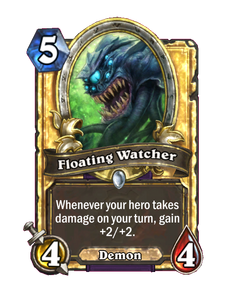 "Evil Eye Watcher of Doom" was the original name, but marketing felt it was a bit too aggressive. 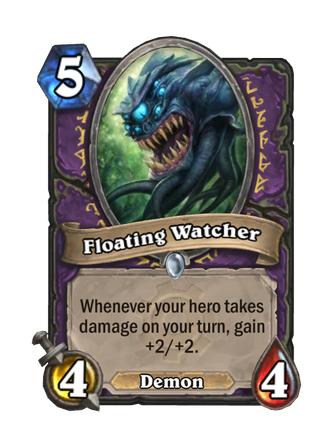 Floating Watcher is a common warlock minion card, from the Goblins vs Gnomes set.

Many warlock cards are stronger than average at the cost of the user's health; the Floating Watcher can turn that into a powerful board presence. Ways to trigger its effect include

Siphon Life can also trigger its effect if the player cast it on his own hero, since it does 2 damage and then restores 2. This can be a situational solution for better board control, or finishing the game.

Neferset Thrasher can trigger its effect without playing any cards since it only needs to attack for Floating Watcher to get a free +2/+2.

Unlicensed Apothecary can easily ramp up Floating Watcher's stats especially with low cost minions but be aware that it deals 5 damage per summon to hero which makes this strategy very costly.

Spreading Madness (if lucky) can increase Floating Watcher's stats significantly if hero is hit 9 times for a maximum +18/+18.

Combined with Hellfire or

Felfire Potion, Floating Watcher can provide large amounts of burst damage as a game finisher while still alternatively providing board presence. It also gains health from these board clears, effectively taking diminished damage. Self-damage on your own turn can also be caused through playing minions like

Mad Bomber, attacking a minion using a weapon (such as after playing

Boom Bot. Mages who obtain this card (such as through

Unstable Portal) can use

Fireblast on their own hero during their turn to buff Floating Watcher.

The Floating Watcher is a member of the Observer race.