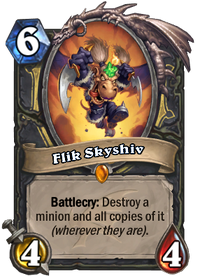 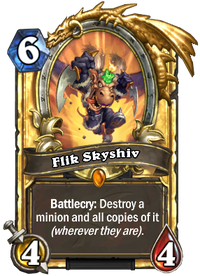 Battlecry: Destroy a minion and all copies of it (wherever they are).
Flavor text

Junior explorers scan the night sky in fear of her candle’s flame!

Flik Skyshiv is a legendary rogue minion card, from the Descent of Dragons set.

Flik Skyshiv can be obtained through Descent of Dragons card packs, or through crafting.

Hard removal on a decently statted body means Flik will be useful in almost any deck, but as an added bonus, she destroys all copies of another minion. Costing only one mana more, Flik can be used in almost the same way as Vilespine Slayer. Not only does Flik gain one more attack than Vilespine Slayer, she also does not depend on Combo to activate, which can be difficult with a five-mana card.

Flik is effective against decks that rely on acquiring multiple copies of a single minion like Pogo-Hopper, Jade Golem, Shudderwock, and Coldlight Oracle. Flik is also very effective against cards that flood the board with multiple copies of minions like Scion of Ruin and Galakrond, the Tempest, and is likewise great at clearing large boards of tokens such as Treants and Silver Hand Recruits. Note that Cast When Drawn cards are unaffected by Flik since they have different names to their summoned counterparts.

Flik can also destroy friendly minions, although this would not be an upside unless the enemy also happened to have the same cards. For example, destroying a friendly Zephrys the Great can be detrimental to the opponent if said opponent controls another Zephrys in hand or deck. Flik can also destroy a friendly Albatross to completely rid the deck of them, which is useful against decks with many ways to generate more Bad Luck Albatrosses, and especially useful when played in a Highlander deck. However, the upside may also be a downside, as it is also possible to destroy an enemy minion and all friendly copies of it as well. For example, destroying an enemy Kronx Dragonhoof would also destroy Kronx in hand or deck. A played Flik can even destroy itself if she targets a copy of herself.

Overall, Flik is an efficient removal tool, but with its extra effect, targets should be carefully considered to ensure that friendly copies of important cards are not destroyed as well.