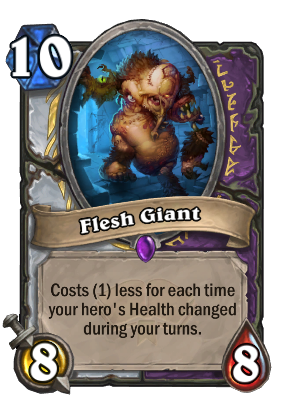 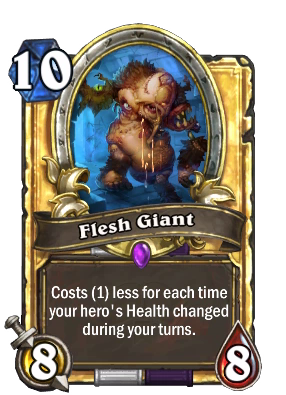 Costs (1) less for each time your hero's Health changed during your turns.
Flavor text

Flesh Giant is an epic priest/warlock minion card, from the Scholomance Academy set.

Flesh Giant can be obtained by:

A good card for both Handlock and Control Priest, which will change their hero's health frequently throughout the game. Handlock has a stronger hero power and plenty of healing, meaning they will typically reduce the cost faster.

Towards the end of the game, one or two Flesh Giants can be dropped for free following a mass board clear like Plague of Death or Twisting Nether, retaking the board with 8/8 minions.

Despite its name, Flesh Giant is not a flesh giant, but a flesh beast or mutated abomination.

Mutated abominations are powerful abomination constructs of the Scourge that was created by Professor Putricide.