This article is using {{Card template}}.
See Help:Style guide/Card for how to edit this kind of article.
Edit this article
Flamewaker
2275 • BRM_002
Regular 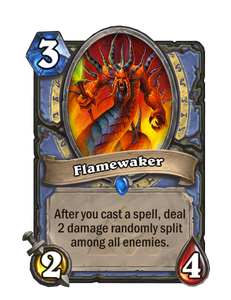 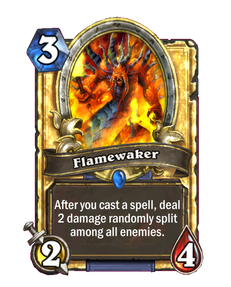 Flamewakers HATE being confused for Flamewalkers. They just wake up fire, they don’t walk on it. Walking on fire is CRAZY. 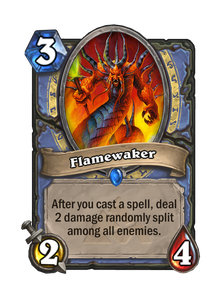 For the event version of this card, see Flamewaker (Event).

Flamewaker is a rare mage minion card, from the Blackrock Mountain set.

Flamewaker is an incredibly strong card in Tempo Mage decks that run multiple cheap spells. While low-cost spells have a relatively low impact on its own, Flamewaker turns them into additional source of removal and face damage. With a Sorcerer's Apprentice on board, it lets you chain even more spells for more damage, while Stargazer Luna and Mana Cyclone keeps your hand loaded for more spells. Flamewalker is a natural fit for these spell-spamming decks. It also synergizes incredibly with Spare Parts, making Flamewaker an excellent pick for a Mech Mage deck.

The Flamewaker represents a substantial threat to the opponent, and should usually be removed as quickly as possible. For this reason it's usually best to play it immediately before a number of spells. This makes cheap spells especially valuable, since the player can cast several in the same turn as summoning the Flamewaker. As the opponent, bear in mind the immediate damage output of this minion is limited by the number of spells in the controlling player's hand. The possibility of Taunts and other protective measures mean the Flamewaker should always be a priority target.

Summon
I serve the firelord.

Flamewakers are ruthless servants of Ragnaros. Little is known about flamewakers. They are creatures not purely of fire. They are fiery elementals, but their bodies are flesh and blood. A flamewaker has a humanoid torso with long muscular arms which rests on a serpentine body; the creature's elongated head has a distinctively demonic quality. Its body is mostly covered with yellow or red scales, though a broad strip of grayish scales runs from its chest down the front of its body. Thick spikes range from 1 to 3 feet long protrude from its shoulders, arms, and tail. Few of these fiery harbingers remain following Ragnaros' defeat in the Firelands.

A Flamewaker is an ambitious sort of fire elemental. In addition to being helpful when you need to rouse a sleepy fire, Flamewakers tend to be tougher and smarter than their fellow elementals, and often possess some skill in the arcane arts. Fire is their weapon of choice, and you can count on turning their scouring flames to your service should you win a Flamewaker’s loyalty.[4]