This article is using {{Card template}}.
See Help:Style guide/Card for how to edit this kind of article.
Edit this article
Flamestrike
1004 • CS2_032
Regular 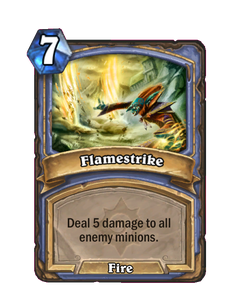 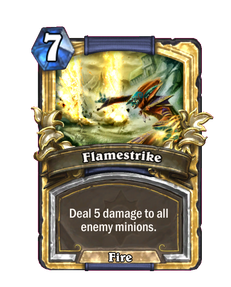 When the ground is on fire, you should not stop, drop, and roll. 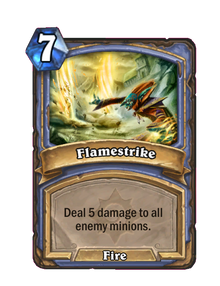 Flamestrike is a mage spell card, inducted into the Legacy set, formerly from the Basic set. 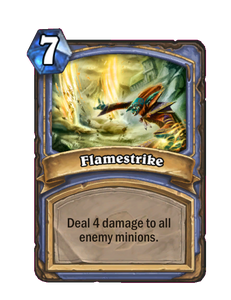 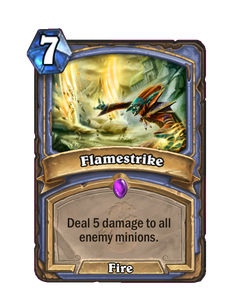 Regular and golden Flamestrike are uncraftable and cannot be crafted or disenchanted.

Two copies of regular Flamestrike are obtained for raising mage to level 8.

Two copies of golden Flamestrike (Core) are obtained for winning 250 games as mage.

Flamestrike (Core) is uncraftable and cannot be crafted or disenchanted.

Flamestrike is potentially one of the most powerful cards in the mage's arsenal. While cards like Polymorph and Fireball excel at dealing with single targets, Flamestrike can clear an entire board of minions with a single cast. Flamestrike is essentially a far more powerful version of Arcane Explosion.

Flamestrike's already formidable powers can be improved with Spell Damage to be even more effective. The majority of minions will be destroyed by a Flamestrike, although tougher ones may require some additional damage.

As with any area of effect spell, Flamestrike is ideally reserved until it can be used on a sizeable enemy force. However, in a pinch Flamestrike can serve just as well as a (somewhat expensive) single-target attack.

Flamestrike is a targeted area of effect spell available to all mages. It deals instant damage and applies a damage over time effect to all enemies in the targeted area. It first appeared as a long-channelled AoE spell of Blood Mages in Warcraft III: The Frozen Throne.