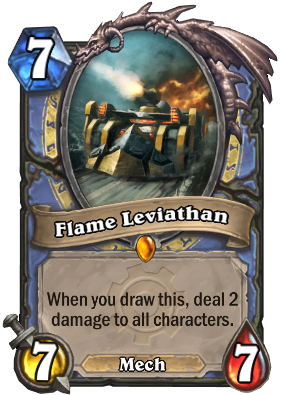 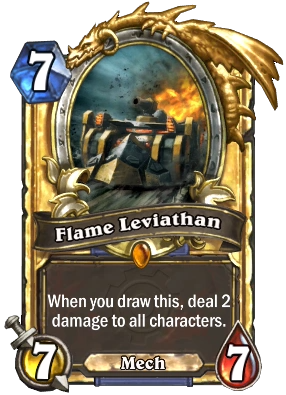 When you draw this, deal 2 damage to all characters.
Flavor text

Mimiron likes to take the Flame Leviathan out on some sweet joyrides.

Flame Leviathan is a legendary mage minion card, from the Goblins vs Gnomes set.

Flame Leviathan can be obtained through Goblins vs Gnomes card packs, or through crafting.

A 7-drop with average stats, Flame Leviathan is notable for its on-draw effect, making it something of a wildcard depending on when it's drawn. Its ability can be very useful for clearing the board of low cost minions such as Murlocs, softening enemy minions for one of the mage's board clearing spells, or giving the player enough damage to finish off their opponent, though it can also do the same for the opposing player. Its important if using a Flame Leviathan to include and mulligan for cards that can withstand its effect, as well as cards that can benefit from it, such as Enrage cards, Nerubian Egg, Acolyte of Pain and Gurubashi Berserker. While random, timing is important in determining whether its effect is positive or negative for the player.

Flame Leviathan is the first boss encounter in Ulduar, found in the Formation Grounds.