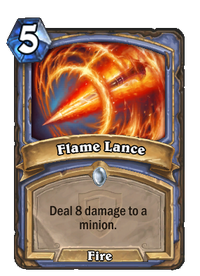 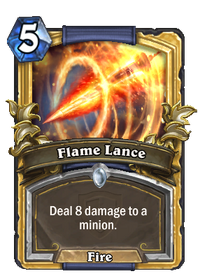 It's on the rack next to ice lance, acid lance, and English muffin lance.

Flame Lance is a common mage spell card, from the Grand Tournament set.

Flame Lance can be obtained through The Grand Tournament card packs, or through crafting.

This card is a useful and powerful removal option, with a strong limitation: it can only be used on minions, and not the enemy hero. This prevents it from being useful in burst-oriented decks, but it can still be useful for removing large minions such as Molten Giant and Alexstrasza, and can often trade with far more expensive cards.

For a slightly more costly, but far more effective alternative, consider Meteor for nearly double the single-target damage and decent adjacent target damage. Rolling Fireball is a superior version of Flame Lance, which has extra utility against anything with less than 8 Health. While outclassed in Constructed, Flame Lance is still a good pick in Arena where high-power removal is premium.

Flame Lance is a spell in the World of Warcraft Trading Card Game. It deals 3 damage to a target ally.