Hearthstone Wiki
Register
Don't have an account?
Sign In
Advertisement
in: All cards, Wild format cards, Pages with no result queries, Imps

This article is using {{Card template}}.
See Help:Style guide/Card for how to edit this kind of article.
Edit this article
Flame Imp
1090 • EX1_319
Regular 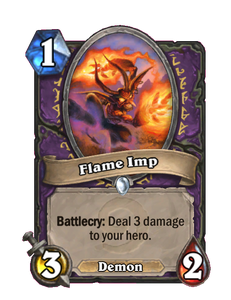 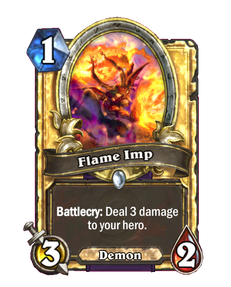 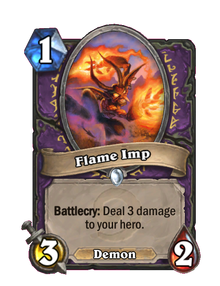 Flame Imp is a common warlock minion card, inducted into the Legacy set, formerly from the Classic set. 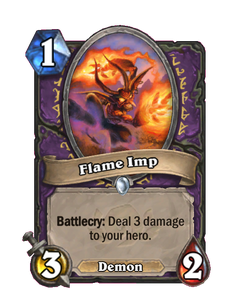 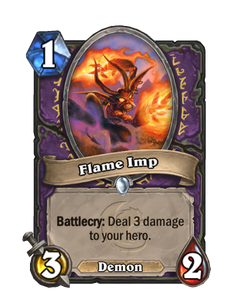 Two copies of regular Flame Imp are obtained for raising warlock to level 1.

Flame Imp (Core) is uncraftable and cannot be crafted or disenchanted.

The cost of the Flame Imp's low mana cost is paid for with the player's health. As a 1 mana 3/2 minion, the Flame Imp provides the warlock with a cheap alternative for early game pressure and burst. Consider the fact that you can drop this on turn 1 and on turn 2 you buff it with Demonfire to make it a 5/4, making for very good early pressure.

A staple pick for aggressive warlock decks, the Flame Imp is ideally played on turn 1, often alongside a Voidwalker, shielding it from attack. Flame Imp generally loses its value as the game progresses, as mana becomes more plentiful and Health generally less so.

It has great synergy with Floating Watcher, immediately giving the Watcher +2/2 due to his hero-damaging Battlecry.